On 21 and 22 September 2017, the sixth edition of Corviale Urban LAB on stage. Among the guests of this edition are Gio Evan, Lercio, Andrea Rivera, Ivan Talarico, Leo Folgori, Gianluca Secco  and the international street artist Moby Dyck

Come back after 4 years the project involving five years ago (2008-2013) the neighborhood and the surrounding areas at Corviale, XI City Hall (Municipio) of Roma. A border area, that of the extreme suburb southwest of the capital, near Portuense road. A new revival for an artistic project that, together with associations and realities of the area, seeks redemption through culture and against marginalization.

They were different from the area’s redevelopment, considered among the 5 most dangerous suburbs of Italy, which over the years have tried to change the appearance and social and urbanization of this neighborhood/palace.

Born in the ’70s as the popular-economic housing solution of a Rome, when there was already living the housing emergency, Corviale is also known as the “serpentone” (trad: “big snake”): on 9 floors and 980 meters in length the urban complex, conceived by architect Mario Fiorentino, welcomes in this unique and immense 1200 family structure (excluding abusive and irregular).

From the video by Urban Experience  (2010, Antonello Anappo tells the origins of the Corvial district between chronicle and anecdotes).

Corviale Urban Lab was one of the first cultural redeveloped projects in the area, and in five years the event “artificially invaded” various places in the town hall and its neighboring places: the Galleria Il Mitreo, the Centro Polivalente Nicoletta Campanella, the Teatro Arvalia, the Atlantico Live and the Forte Portuense, featuring well-established artists such as Piotta, Andrea Rivera, Paolo Benvegnù, The Orchestraccia, Adriano Bono and Cor Veleno who performed alongside young emerging artists in the district, in particular and, more generally, in the capital. 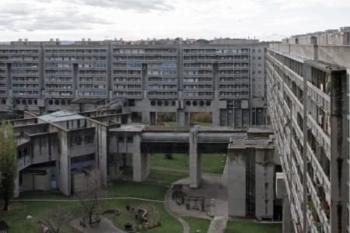 Today, at a distance of 4 years, ARTmosphere, in collaboration with the local associations, has decided to start the activity again by changing the changing conditions of the area and responding to the lack of cultural offerings in the neighborhood. Therefore, ARTmosfera proposes for this three-year program of Eastern Rome this innovative project of territorial redevelopment in the area of the Town Hall XI: the area where it was and continues to be necessary for a constant effort to revitalize the social fabric and urban regeneration

So Corviale Urban Lab event rebirth on with its sixth edition 21 and 22 September 2017 at  Galleria Il Mitreo, the multifunctional space that offers art, theater and concerts near of the “Serpentone” of Corviale.

During the first night – September 21 at 23 (from Mitreo [link https://www.romecentral.com/event/corviale-lutopia-di-un-quartiere-in-un-palazzo/], Via Marino Mazzacurati , 61) – a night walkabout will revive the exploration of years ago realized by Urban Experience, at midnight in the Serpentone.
The videoreport of this action: 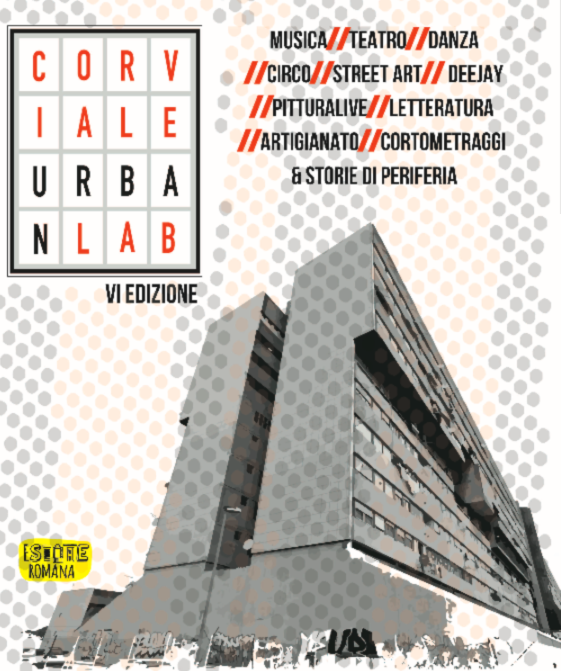 A rich show with many shows and performances, video-exhibition exhibitions and street art.

The proposal ranges from the theatrical readings of the poet phenomenon of the time Gio Evan and Ivan Talarico, to the concerts of Gianluca Secco, the revelation of the Tenco 2016 prize, with Leo Folgori, in pairs with the reading of writer Luca Manoni, and histrionics and irreverent Slavi Bravissime People. Among the guests are also XHU, a modular sound search project and a laboratory where you can experiment with new rhythmic and sound solutions, through an unpublished language, first graphics and then with time become phonetic. For the music among the guests, Diana Winter with her gritty rock and the Sogno della Crisalide, a project known for a song dedicated to Stefano Cucchi.

On September 21, the stars of the editorial team of the satirical italian site Lercio.it, while on September 22, back to Corviale Urban LAB Andrea Rivera accompanied by Patrizio Maria.

While Gio Evan’s literary exhibitions are edited by Moby dyck, he will produce works of art, canvas, paper, jerseys, clothes, using poet’s compositions, contributing to the creation of the literary exhibition that will be traveling along with Gio Evan’s performances all over Italy. Live works on the evening itself will be certified through the system MyTemplart.

The event falls within the initiatives before the BiennaleMArteLive scheduled for December 2017 within which Corviale Urban LAB will also feature a new event at Galleria Il Mitreo. As always Corviale Urban LAB will also host the MArteAwards the Italian nuova art prize, an acknowledgment of the artistic and cultural value of the artists but also of the workmen who during the year distinguished themselves by their originality, artistic skills, commitment and above all for the significant contribution in terms of innovation, which have given the artistic cultural landscape Italian.

During the evenings of 21 and 22 September, the nominations will be announced for each artistic section (music, theater, dance, circus, literature, cinema, video clips, painting, photography, cartoon, illustration, graphics, graffiti, fashion, artistic crafts dj and vj ) and voting on the site arteawards.it will be opened until December when they will be delivered at the BiennaleMArteLive on the closing night on December 10, 2017.

The choice of Corviale as the home of the MArteAwards is symbolic and important because it represents the social redemption of a difficult territory of the Capital and at the same time an opportunity for recognition for artists and talented people who often did not receive the right attention media.

The initiative is organized by the ARTmosfera Association and is part of the Estat Romana program promoted by the Roma Capital Capital of Culture, and realized in collaboration with SIAE.