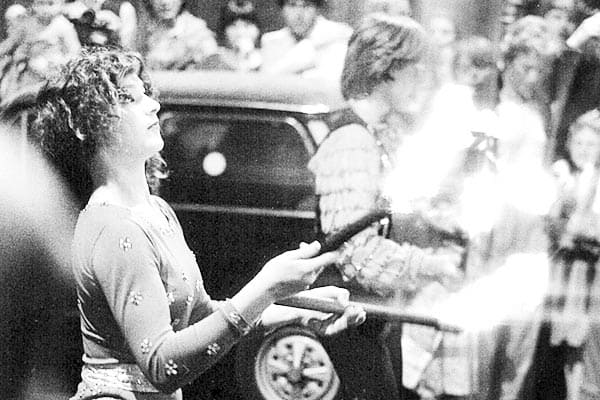 It all began on August 25, 1977, when the “Senso” a movie by Luchino Visconti was projected for free in the Massenzio basilica in Rome. On that day, the “Roman Summer (Estate Romana) ” was born. This summer’s event has taken 40 years but it seems like we do not want to remember how Rome began to become a summer attraction pole for culture and amusement. Before 1977 durimg the August month in Rome you could find only deserted streets, closed shops, hot drowning some junkies and those who for business or economic reasons were forced to stay in town.
Today everything has changed and that Wednesday of 1977 in that open-air cinema, the arena at Massenzio’s Basilica, and subsequent editions of the Estate Romana have changed the way culture and the city live throughout the summer.
The city then looked like a summer venue, finally not so disconcerting to stay in Rome, those who did not go to the sea could comfort with a tide of free initiatives with a style and enthusiasm that today seem to be lost.

Comparing with actual reality along with today’s events and initiatives the situation is quite disconcerting. 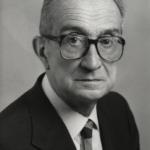 During 1976 Giulio Carlo Argan become mayor of Rome, is the first Rome mayor not belonging to the Democratic Christian partyfrom the Republican era. Argan was the second lay mayor of Rome, the first being Ernesto Nathan who was elected in 1907. When elected mayor Argan was 70 years old and was considered a great intellectual. In those years the city had been devastated by building speculation and had the idea of raising the city’s cultural level. Argan, unlike the intellectuals of the time, had an idea of non-elitist culture and for this reason, within his council he called a 34-year-old precarious assistant to the Faculty of Architecture, Renato Nicolini.

The memory of the moments and the emotions when it was all, or almost all,  free and the City sponsored movie and poetry evenings and the first few times when some student began to think that at the end of August it was better to stay in town to enjoy all these beautiful things. 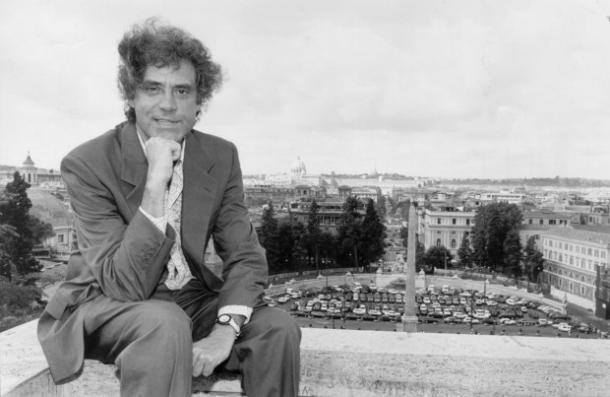 At that time in the capitol administration there was someone who was able to express himself and to face a change that made it possible to conceive what everyone today knows as the “Roman Summer (Estate Romana)“.
Forty years have passed since Renato Nicolini, Councilor for Culture of the then Mayor Giulio Carlo Argan, together with a group of young film enthusiasts decided to project the film “Senso” on August 25, 77, in which a hundred spectators , who paid only an associative card of 100 lire, were the pioneers of this initiative that overwhelmed the citizens and tourists in Rome.

On August 26 of that year, the three films of the “The Planet of the Apes” saga were screened, and it was an unprecedented success. Finally, culture entered the squares and streets of Rome, giving the Romans the summer night after a real period is curfew since in 1977 they lived in the terror of the so-called “years of lead“.
People start coming out and the second night at Massenzio there were more than 4,000 people …there was the people, and as Nicolini reminded me of, appeared in 2012, “… I sat down among a Roman family who had taken to eat the rigatoni on one side and some boys trying to smoke a joint.”

In some ways culture is no different from food; the more they taste delicious dishes, the more you want to eat and taste, to get out of your own sown and to confront the flavors of the world and so after a night of outdoor cinema you get back home frightened by the projections and from sleep, but all participants are awakened with a growing and lively hunger, not only of the mythical hot after-midnight but also, and above all, of cultures.

Nicolini after tasting the first successes seems insatiable so that over the years to follow he multiplied initiatives such as: The Festival of Poets on the dunes of Castelporziano, the projection of the “Napoleon” by A. Gance in front of the Arch of Constantine , the Panasiatico Festival in Valle Giulia, the Central Park, which houses the cities of theater, dance, rock and television, but above all the councilor and his team of collaborators strive to bring culture and art directly under the window of the citizen and not vice versa.

Cinema on the Dunes of Castelporziano, 1984

In the years to come, Renato Nicolini will be accused by the opposition, but also by some of his political areas, not being a true councilor to culture and coining him as the “Councilor of the ephemeral.” The criticisms were focused on offering costly forms of culture to administration, non-permanent and easy and superficial consumption, and therefore to be added “non-elitist”. It was Nicolini himself who, in a round table on “The Ephemeral and Mass Culture” of 1982, explained the innovative value of his thought: “The profile of the light appearance of the Roman manifestations contains in itself the search for a dimension an alternative policy capable of achieving not so much the prefiguration of a possible hypothetical future, the formulation of virtuous society models, but the ability to choose those elements that are capable of producing movement, formulating new hypotheses, renewing culture and policy itself. “

Beyond the controversy and focus exclusively on free reasoning, without snobs and distinctions, without manipulation and above all, without resorting to the usual marketing operations, we still remember what he himself declared a few years before he died prematurely: «Then the tired logic of politics prevailed again, the machine undergoing bureaucratic bargaining, landing attempts, the costs shrunk … The parties realized that initiatives like these bring consensus and are appropriate» 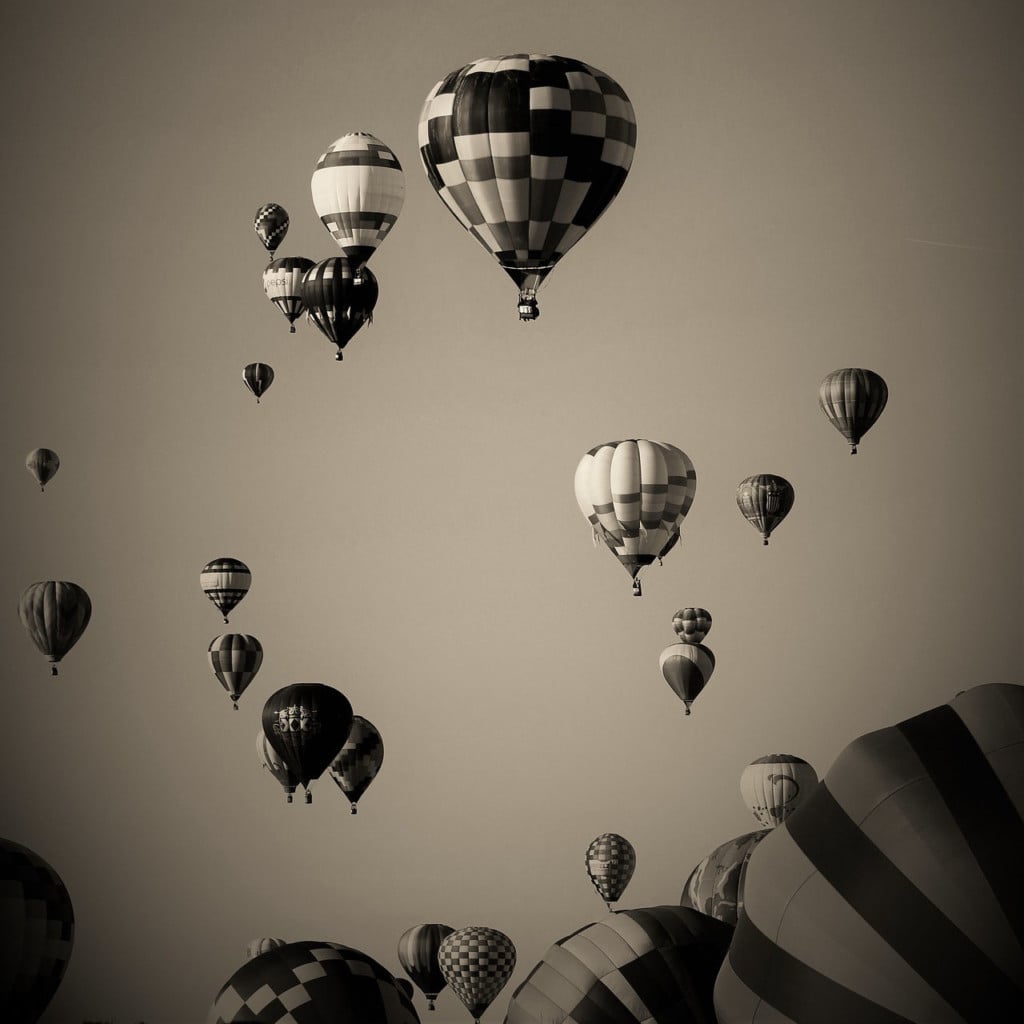 The wonder of the thousands of hot-air balloons getting up, liberated in Piazza del Popolo, colorful and cheerful to the sky over a crowded and crowded square of people, those images of the ’70s, the years of lead of terrorism, are and will remain forever in memories and in the heart of those 200,000 people who have been watching and watching the sky of Rome today hoping to see again flying the culture and art over this marvelous city of Rome.

Some people called “The Roman Summer” a real miracle for Rome, others underestimated the results.
Culture has proven itself to be a great flywheel for the city’s economy, revenue and well-being could only be verified when the tourist attractions in the capital began to multiply. Before the existence of the Roman Summer, the city of Rome was a place to avoid in August, the memory of the deserted streets and a “High Noon” atmosphere we all remember.

Unfortunately, as is often the case, the excellent results of the past do not stimulate new ideas and is currently experiencing a kind of cultural stasis in the city, where public cultural initiatives are overrun by hundreds of equally equally marketed stalls selling unreal products among the luminaries of summer nights that Rome does not want to forget.
It is often thought that a riverside with long list of restaurants combined with stalls and nothing else can create happiness and positivity where the free cultural initiative is not stimulated, far from profit and the purchase of goods … only the brightest minds include that where there is a strong cultural offer always starts a positive economic flywheel, which grows organically and makes the citizen free to choose and happy not to feel a mere consumer.

Renato Nicolini (Rome, March 1, 1942 – Rome, August 4, 2012) was an Italian architect, politician and playwright, also known abroad, especially for the initiatives he took when he became the creator of the “Roman Summer”. As a politician he has gained enormous fame as a councilor of Culture of the City of Rome in the period 1976-1985, in the left administrations of Giulio Carlo Argan, Luigi Petroselli and Ugo Vetere. He embarked on a cultural policy called the “ephemeral” whose most famous product was the “Roman Summer”, a political-cultural machine that produced controversy, but also defined new horizons about the potential of cities. (source Wikipedia)