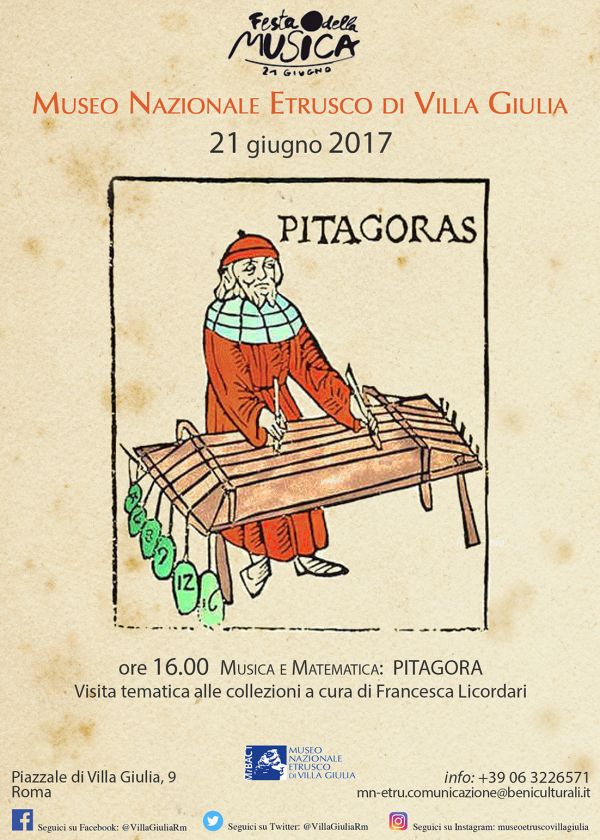 On Wednesday, June 21, 2017, the Festival of Music will return, on the initiative of Minister of Cultural Heritage and Tourism Dario Franceschini. The event was born in France in 1982, with the idea of ​​involving all citizenship in an organic way, with a message of culture, participation and integration that only music can give. A great event that sees music as its protagonist in all its forms, everywhere from museums to archaeological areas, to stations, to hospitals, to cultural centers to the streets and squares

The Etruscan National Museum of Villa Giulia adheres to the initiatives of the MIBACT illustrating to the public the origins of music in the ancient world.

For the occasion, Wednesday 21 June 2017, at 16.00, a free theme thematic visit to museum collections, titled “Music and Mathematics: Pythagoras”, by Dr. Francesca Licordari. The visit intends to present to the participants the figure of the Greek mathematician and philosopher Pythagoras, who lived in Magna Grecia in the 6th century BC, which, according to some Latin texts, was termed “Etruscan”, probably because in the rules of life he gave to his disciples You have been aware of the Etruscan customs. Music becomes Pythagoras a mathematical tool to understand the harmony of the universe.

The 50-minute visit will take you to the section dedicated to Vulci, with vases depicting musical instruments and bones in ivory and ivory, and the semi-circular room on the noble floor of the Villa where you can admire some bronze music instruments.

Participation in the visit is free of charge, the cost of the entrance ticket is the ordinary one, except for gratuities and reductions provided by law.

i3factory.com
One comment to “FESTIVAL OF MUSIC 2017 IN ROME: MUSIC AND MATHEMATICS: PITAGORA”