Giuseppe Vasi (Corleone 1710 – Rome 1782) was one of the most important engravers of the views of Rome. He was the master of Giovan Battista Piranesi and we can consider it one of the most important engravers of the eighteenth century. What characterizes the work of Vasi is the history, through the engraving, the streets and the landscapes of Rome, by inserting the aristocratic traits, but giving way to beggars.
His pictures were the point of reference for travelers of the time, the so-called Grand Tour was a great show among young aristocrats throughout Europe.

The Grand Tour was a long journey to continental Europe by the rich young people of the European aristocracy from the seventeenth century and destined to perfect their knowledge by leaving and arriving in the same city. It could last from a few months to several years, and it usually had the destination of Italy … The term tourism and more generally the phenomenon of today’s tourist travels as a mass culture originated from the Grand Tour.

Vasi had many honors and among the many was also named Count Palatine and Knight of the House Lateran. The main work of Giuseppe Vasi, of the Magnificences of Ancient and Modern Rome, was published between 1747 and 1761 and counted 10 books. With this work, Vasi intended to return the face and structure of Rome as the capital of Christianity just as it was turning into a modern city. In those years new social exchange sites and great works were created for the work and business, when new urban decorations were born at the wish of pontiffs and patrons.

Le Magnificenze di Roma antica e Moderna, 10 volumes released between 1747 and 1761, has the feature that each book contains 20 engravings.
We know that 100 of the original matrices have been recovered on the antiquarian market and are today at the National Institute for Graphics in Rome.

Each Book of Magnificence is dedicated to a specific theme:

Vasi’s engravings have the characteristics of documenting the city, the artist was a very sensitive spirit of the society of his times, remaining tied to the “spirit ancien régime” typical of the papal court and among the aristocrats of Roman society in the 18th century Century and acor partly still present in some lounges of decadent nobility still present in the capital.

Vasi was a very open mind artist and in his work expresses a disillusioned love for the city of Rome, where his strong interest in antiquity stands out. Vases appreciate and contemplate the ruins of ancient Rome that inspire him in almost all of his work.

In the first period, he began working with waterproof technique with “roofing” technique, a way so fascinating to fascinate the young Piranesi who, just arrived in Rome in 1740, will go to the workshop to take his own lessons At the workshop of master Vasi, who at the time had a chalkboard shop that at the time enjoyed in Rome of good popularity. Around 1742 the young Piranesi learned the rudiments of the fork just under the guidance of Giuseppe Vasi.

Poetry in engraving
Vasi has a facility to add a touch of poetry in his engravings inserting and attention to the reality of the times, unlike the cold and analytical view of the detail and monumental architecture that was typical of engravers who had preceded him.

In his second part of the work (1756-1761), the artist focuses on the life of the urge and the engravings depict the interior of the city of Rome, that is, the most significant places in the town center such as hospitals, monasteries, parish churches , Colleges, hospices, in addition to the most important villas and gardens. The Itinerario istruttivo
The initial program, already announced in the 1940s, provided for the Magnificent to be accompanied and linked by a tourist guide and a plant. Vases, completed the Magnificences, therefore published the Itinerario istruttivo (Instructive Route), a guide that had a great success until the middle of the 19th century. The Educational Itinerary is divided into eight days to easily find all the ancient and modern beauties of Rome. That is, all the works of painting, sculpture, and architecture.

Prospect of the Roman city of Rome
In 1765 Vasi published the Great Prosperity of the ancient city of Rome (Gran Prospetto dell’alma città di Roma), an extraordinary plant, beautifully realized as a “bird’s eye view” of the entire city of Rome. The plant is made of twelve plates measuring 1025 x 2615 mm and is the largest ever dedicated to the city. In turn, the Great Prospectus was flanked by four related views, dedicated to the many patriarchal basilicas, namely St. Peter in the Vatican, St. John Lateran, St. Mary Major and St. Paul Outside the Walls. 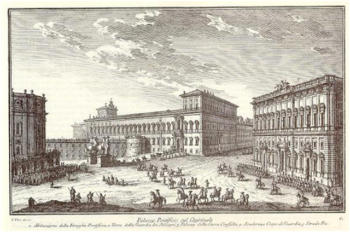 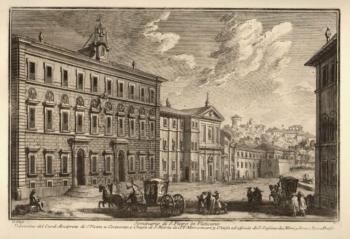 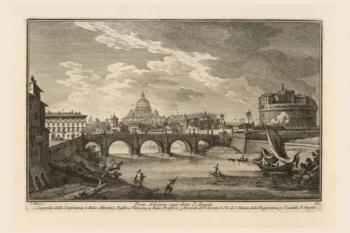 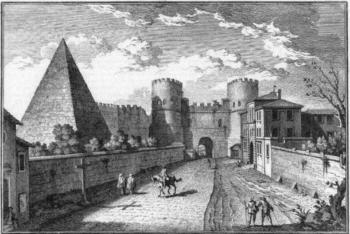