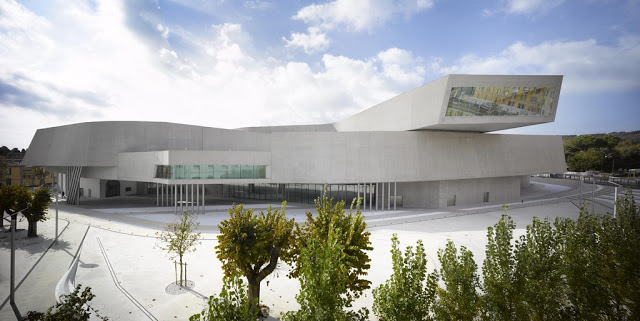 The National Museum of XXI Century Arts, better known by the acronym Maxxi, is a particular structure for the city of Rome, as it was specially dedicated to creativity and art more modern and contemporary than in 2000 as suggests the same name.

The museum is located in the Flaminio district of Rome and is managed by a foundation that has been specially created by the Ministry of Cultural Heritage;

Spaces: the weapons to the arts

The history of the MAXXI begins in the fall of 1997, when the then Minister for Cultural Walter Veltroni obtained from the Ministry of Defence on the sale of a large area in Rome’s Flaminio district, occupied by garages and pavilions of the former Montello Barracks in disuse time, with the aim of creating a new museum dedicated to the national contemporary art.

The three-hectare area, between Via Guido Reni, Via Masaccio and avenue Pinturicchio, are located in a major urban area of the capital, affected by other interventions of architecture and urban redevelopment such as the Auditorium by Renzo Piano, the Space Agency Italian Massimiliano Fuksas, the pedestrian bridge over the Tiber.

In this context, the position of the MAXXI stands as a key element in the fabric of cultural activities in which there emerges a system that extends from the Foro Italico and Villa Glori on the slopes of the Mount of Parioli. 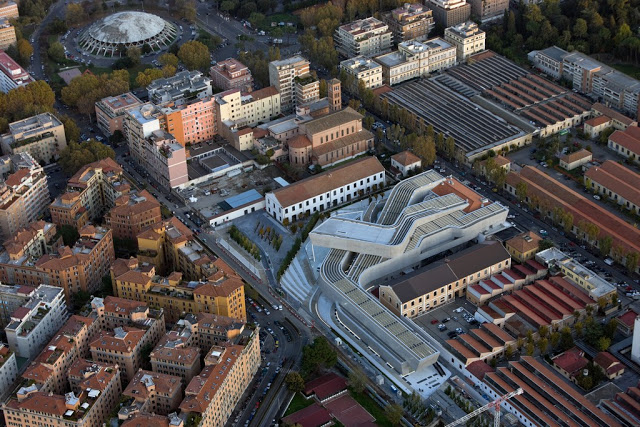 The history of the museum.

The idea of ​​a center for contemporary art in Rome was founded in 1998 with the transfer of the former Montello military barracks.

In 1998, the Ministry of National Heritage and Cultural Affairs announces an international ideas competition for the design of “National Centre for Contemporary Arts.”

In 1999, Zaha Hadid, born superstars in Iraq but then naturalized British, won the competition for the project with an idea that makes multidisciplinary ia provide adequate space for experimentation and innovation in the arts and of ‘architecture. In 1999, the Ministry of Heritage and Culture has commenced with the first restoration of some buildings of the former Montello Barracks which was supposed to maintain in the project by Zaha Hadid.

Among the 15 proposals selected for the second stage, won the project by architect Anglo-Iraqi architect Zaha Hadid, chosen for its ability to integrate into the urban fabric and the creativity of the architectural solution proposal.

The inauguration was in 2010, it took ten years to see the MAXXII, so that there are several changes to the project, before arriving at a final decision. 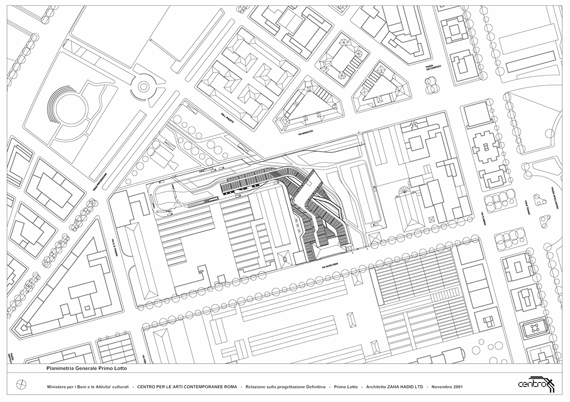 The same Hadid describes his work: “Our project proposes a quasi-urban field, a world in which to dive rather than a building as an object signed. The Campus is organized, and is navigated, on the basis of directional drifts and distribution of density, rather than by key points.

This is indicative of the whole character of the Centre: porous, a place to dive into, spatial extension. Circulation, both external and internal, follows the general drift of the geometry. It ‘important to state here and now that the premise of the project leads to disregard the value of the exhibition space inspired the building object. “

The cultural activity – a significant referred to as “The Center of the Center before” – began in December 2000 and continued over the years with a series of proposals aimed not only to the promotion and dissemination of contemporary culture in Italy but also primarily to acquire – even through the instrument of competition – works of art and architecture for the creation of the collections of the two museums istituendi. 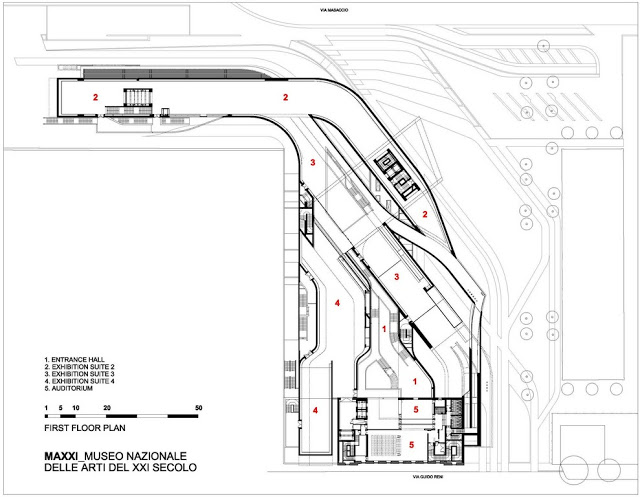 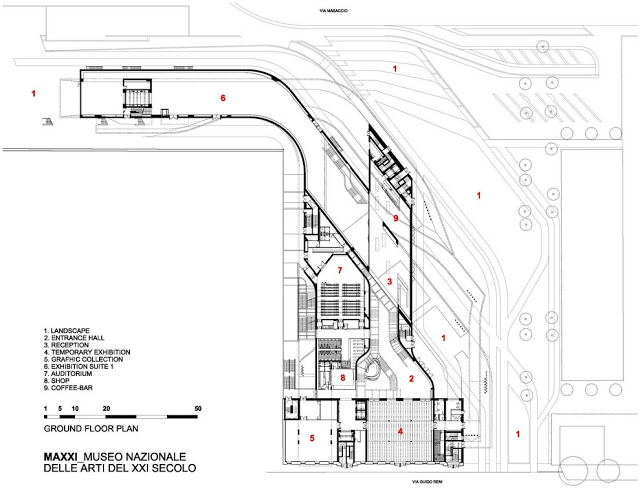 On 20 March 2003, with the ceremony of the “laying of the first stone“, it gives the official start of construction work on the museum. For the occasion, the fledgling institution takes his new and final name: MAXXI – NATIONAL MUSEUM FOR THE ARTS OF THE XXI CENTURY that embodies the idea of the cultural project of the future museum.

Description of the structure and collections.

The building is a composition of lines that intersect and join one another, in a form that immediately captivates the visitor a view of giving the idea of ​​something futuristic.

The Maxxi complex consists of two separate museums: the Maxxi dedicated to the art and dedicated to architecture, in addition to its auditorium, library specialist, a bar–restaurant, galleries established for the temporary exhibitions and educational activities of the more different.

Even the square that is in front of the entrance, spacious and bright, has been designed to accommodate various events.

Some Romans think it is a place where elegant rendezvous and consider it a national symbol for modern art. The permanent collections are not very aplie but are growing daily thanks to new acquisitions and through the promotion of young artists.

Work currently most in vogue are those of Anish Kapoor, Gerhard Richter, Francesco Clemente from the point of view of painting and art in general, and the architecture is well represented by members of prestige as Carlo Scarpa, Aldo Rossi and Pierluigi Nervi .

Address: Via Guido Reni, 4 In Rome

2 comments to “The places of the contemporary: MAXXI between Architecture and Art”