The future is presented in Rome with digital art at the San Lorenzo neighborhood. New geometries and compositions take shape in the former customs to tell how art takes on different facets with new technologies. It is a future that comes from far away from the one proposed by Ex Dogana  ArtFutura Roma, customs, and it projects us in the next, contemporary and current digital art experience as a visionary and virtual artistic interpretation.

As you walk into the immense spaces of the former industrial area, the rooms where they were once smoked, the goods welcome you with unusual shapes and kaleidoscopic images, ready to project you into environments that remind Lang’s atmospheres in “Metropolis”, the movie , with its special effects of the early 1900s and some of the optical illusions that recall the dimensional effects realized by Schüfftan. And then they give you back to the contemporaneity of more complex experiments, the world of art that binds to video and digital in new graphics and animations.
Design, mobile illustrations and figures that can be transformed in a short while, are the silent driving in an outdated environment that encloses the 26 years of ArtFutura, the Festival of Culture and Creativity Digital, the international exhibition that for the first time brings the future version of some of the leading international artists, and all its history in Rome.

The exhibition is based on ArtFutura’s festival of digital culture and creativity. Born in 1990, the festival is celebrated every year in Barcelona, ​​Buenos Aires, Ibiza, London, Montevideo and several other cities in the world to present ideas and projects pioneers of the Cyberculture movement since the ’90s, including Rebecca Allen, William Gibson and Montxo Algora (who have given and continue to lead the festival).

Many artists and productions involved in this year-round traveling exhibition-performance has been enriched with reflections on the progress of digital art and the social implications of new technologies: computer animation, video games and special effects revisited by artists and thinkers coming from different disciplines.

So while cities are focusing on smart city models, and in recent years the AI ​​and the support of new technologies offer new horizons of social and economic development, the art world has long been talking with new interfaces to develop new worlds and sensory experiences. This future appointment propose a connection between art and science, until September 10, 2017, for the ArtFutura’s Roman exhibit with 7 installations in 7 hangar and made by 7 visual designers and international digital artists : Esteban Diácono – who edited the video of Ólafur Arnalds, Chico MacMurtrie, Paul Friedlander, Sachiko Kodama, Universal Everything, Can Buyukberber.

Can Buyukberber a Turkish artist implanted in San Francisco, deals with immersive audiovisual experiences in physical and digital space. There are three works at ArtFutura Roma: Morphogenesis, Celestial Collisions and Generative Tissues for its artistic experimentation focus on perception and use technology to declinate works mapping, virtual reality, building geodesic domes and digital software.

Morphogenesis is an audiovisual installation on a 18-square-foot screen. A continuous transformation that converts virtual space into a temporal succession that takes the forms of a true narrative. The composition and fragmentation of elements gives shape to unrealistic landscapes, reveals new geometric shapes and relationships between elements to create psychedelic images that recall family scenarios and new futuristic dimensions. It is a game of three-dimensional geometric spaces in image contamination: visual atoms and geometric micro-elements create the illusion of infinite dynamic spaces, in a never-ending evolution, giving suggestions that at times seem to chase models of art history from Max Ernst to Escher, reinterpreting in virtual form “figures” that appear to come from illustrations by William Blake for Milton’s “Lost Paradise”. 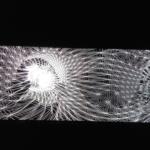 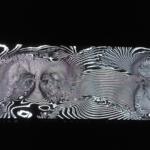 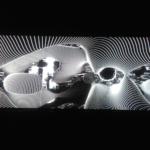 Crossing rooms with the kinetic sculptures of physicist and English mathematician Paul Friedlander – Kinetic light sculptor of “Spinning Cosmos”, which creates dynamic oleaginous shapes floating in space thanks to mirrors and kinectic elements that create endless prospects and the use of “chromastrobic light “, the light that changes color fast, application of its invention. 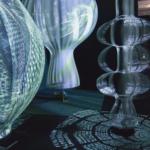 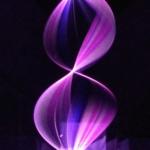 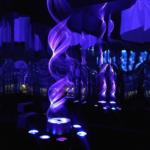 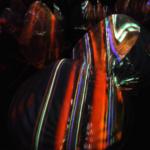 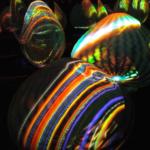 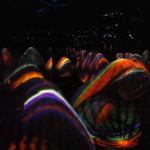 The video and graphics combination, kinetic experiments and a collection of festival catalogs fill this exhibition curated by Montxo Algora, director of the international festival “ArtFutura”, produced by MondoMostre Skira with the patronage of Roma Capitale municipality and the University of Rome studies “La Sapienza”.