I remember his face, his intense eyes and that sweetness in which he explained what he felt inside, the most beautiful memory of a great master, remained simple inside despite his world greatness … today the master Gabriele Basilico is in Rome from 25 January to 13 April 2020 in a major Metropoli exhibition, which cannot be missed at Palazzo delle Esposizioni, curated by Giovanna Calvenzi and Filippo Maggia. Promoted by Roma Capitale – Department of Cultural Growth and by the Palaexpo Special Company, created in collaboration with the Gabriele Basilico Archive. 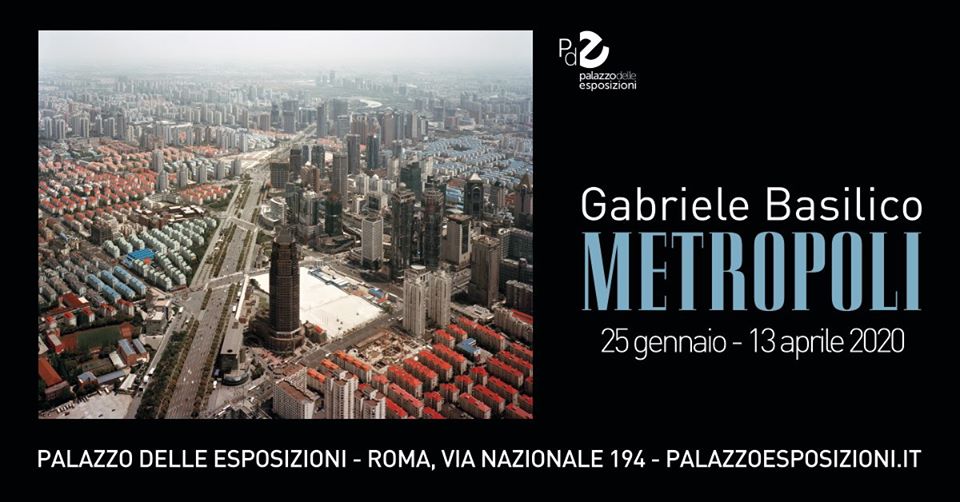 The maestro is among us despite his disappearance in 2013 and through his eyes he will tell us of his story lived between him and his camera focused on the theme of the city. It is interesting to know through this exhibition a significant insight into Italy, with over 250 photographic works in different formats dating from the seventies to the two thousand, some of which are exhibited for the first time. There are numerous cities portrayed, including Beirut, Milan, Rome, Palermo, Naples, Barcelona, ​​Madrid, Lisbon, Paris, Berlin, Buenos Aires, Jerusalem, London, Boston, Tel Aviv, Istanbul, Rio de Janeiro, San Francisco, New York, Shanghai, combined according to analogies and differences, assonances and dissonances, different points of view in the way of interpreting and relating the built space.

The metropolis has always been at the center of Gabriele Basilico’s investigations and interests. The theme of the anthropized landscape, the development and the historical stratifications of the cities, the margins and the suburbs in continuous transformation have been the main engine of his research.

The exhibition itinerary of the exhibition is divided into 5 moments: “Milan. Portraits of factories 1978-1980 “, the first important project realized by Basilico; the “Sections of the Italian landscape”, a survey of our country divided into six itineraries carried out in 1996 in collaboration with Stefano Boeri and presented at the Venice Architecture Biennale; “Beirut”, two photographic campaigns exhibited together for the first time, realized in 1991 in black and white and in 2011 in color, the first at the end of a long war lasting over fifteen years, the second to reconstruct it; “The cities of the world”, a journey through time and places from Palermo, Bari, Naples, Genoa and Milan to Istanbul, Jerusalem, Shanghai, Moscow, New York, Rio de Janeiro and many others; finally “Rome”, the city in which Basilico has worked on several occasions, always developing different projects until 2010, on the occasion of a stimulating and demanding comparison between the contemporary city and the eighteenth-century engravings by Giovambattista Piranesi.

In addition to the works on display, a large illustrated biography is proposed which tells through short texts and images the artistic and professional path of Basilico (several times in fact the two spheres crossed) and three videos: the first created by Tanino Musso in 1991 in Beirut and edited by Giacomo Traldi who has also reworked an interview by director Amos Gitai in 2012 dedicated to Rome and Piranesi. The third video, “About Sections of the Italian Landscape”, is an interview with Stefano Boeri made by Marina Spada in 2002. 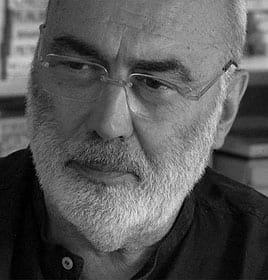 Gabriele Basilico (Milan, 12 August 1944, Milan, 13 February 2013) was one of the greatest Italian photographers of the twentieth century and one of the masters of contemporary Italian and European photography. He began photographing in the late 1960s with social survey photographs. After graduating in Architecture from the Polytechnic of Milan (1973), he devoted himself to photography with continuity. His first important research was in 1978-1980, “Milan. Portraits of Factories “, presented in 1983 at the PAC (Contemporary Art Pavilion) in Milan. The first international assignment was in 1984, when he was invited to participate, the only Italian, in the Mission Photographique de la DATAR, the important project of documentation of the transformations of the contemporary landscape wanted by the French government. From this work the book and the exhibition Bord de mer are born. In 1990 he received the “Prix Mois de la Photo” in Paris for the exhibition and the book Porti di Mare. In 1991, with an important project on the city of Beirut devastated by a fifteen-year civil war, his reputation moved to an even more decidedly international level.

A first balance on his work is the subject of the retrospective at the Galleria Gottardo Foundation in Lugano in 1994 and the volume L’Experience of Places. Photographs 1978-1993.

Invited to the 1996 Venice Biennale with the exhibition “Sections of the Italian landscape / Italy. Cross Sections of a Country ”, in collaboration with Stefano Boeri, receives the“ Osella d’oro ”award for contemporary architecture photography.

In 1999 he published Interrupted City and Cityscapes, with over three hundred images of cities created since the mid-1980s, which he exhibits at the Staedelijk Museum in Amsterdam, at the CPF (Centro Portugues de Fotografia) in Porto, at the MART (Museum of Modern Art of Trento and Rovereto) of Trento, and at the MAMBA (Museum of Modern Art) of Buenos Aires.

In 2000 he worked on the metropolitan area of ​​Berlin at the invitation of the DAAD (Deutscher Akademischer Austausch Dienst) and exhibited “Milan, Berlin, Valencia” at the IVAM (Valencia Institute of Modern Art) in Valencia. He also received the “I.N.U.” (National Institute of Urban Planning) award for his contribution to the documentation of contemporary urban space.

In 2002 the GAM (Gallery of Modern Art) in Turin dedicated a retrospective to him, and in the context of Photo España with the volume Berlin he won the prize for the best photo book of the year. In 2003 he participated in the 5th Biennial of Architecture and Design in Sao Paulo with an exhibition in collaboration with Alvaro Siza, subsequently exhibited at the Triennale of Milan and at the PAN of Naples.

In 2005 he published the book Scattered City, a collection of unpublished images of cities in Europe. In 2006 he exhibited at the Fundação Calouste Gulbenkian in Lisboa and received a job assignment from the Nouveau Musée National de Monaco.

In 2006 he published the volume Photo Books 1978-2005, which collects and illustrates his personal books and many of the most important collective books in which he participated. The same year, on the occasion of a major retrospective at the Maison Européenne de la Photographie in Paris, he published the monograph Appunti di un Viaggio / Carnet de travail 1969/2006.

In 2007 he exhibited at the Palazzo della Ragione in Mantua, at the Ara Pacis in Rome, at the Fondazione Ragghianti in Lucca, at the Provincial Art Gallery of Bari. He was also invited to the LII Art Exhibition of the Venice Biennale where he presented photographs of the Beirut 1991 series. Also in 2007, he made a large photographic campaign on Silicon Valley on behalf of the SFMoMA (San Francisco Museum of Modern Art) in San Francisco, where he exhibited in 2008, publishing the volume Gabriele Basilico-Silicon Valley. In addition, he received the “International Architecture Photography Award” from the Astroc Foundation in Madrid and exhibited there. The exhibition is accompanied by the volume Intercity. In 2008 he carried out a research on the city of Rome, presented at the Palazzo delle Esposizioni with the book Rome 2007. The same year he presented a research on the transformation of the city of Moscow seen from the seven “Stalinist towers”, carried out in collaboration with Umberto Zanetti, at the Cité de l’Architecture / Palais de Chaillot in Paris. The volume that collects the work is titled Vertical Moscow.

His research is expanding more and more to the great metropolises of the world and in 2010-2011 he works on Istanbul, Shanghai, Rio de Janeiro, publishing in 2010 Istanbul 05.10, in 2011 From Istanbul to Shanghai, always in 2011 Basil. Rio de Janeiro 2011. In 2012 he participated in the XIII International Architecture Exhibition of the Venice Biennale with the “Common Pavilions” project, conceived by Adele Re Rebaudengo and created in collaboration with Diener & Diener Architekten, Basel. The Common Pavilions book was published in 2013. Basilico has always intertwined his tireless photographic work on the morphology and transformations of the city and contemporary landscape with seminar activities, lessons, conferences, reflections also conducted through the written word. His thought was collected and summarized in 2007 in the volume Gabriele Basilico. Architecture, city, visions, curated by Andrea Lissoni, while in 2012 Rizzoli published Reading photographs in twelve lessons.

The transformations of the contemporary landscape, the shape and identity of cities and metropolises, have been the privileged areas of research of Gabriele Basilico. On these issues he has published over one hundred personal books. Among the many cities methodically addressed are Hamburg, Barcelona, ​​Bari, Beirut, Berlin, Bilbao, Frankfurt, Genoa, Graz, Istanbul, Lisbon, Liverpool, Lausanne, Madrid, Monte Carlo, Moscow, Naples, Nice, Palermo, Paris, Rome, Rio de Janeiro, Rotterdam, San Francisco, San Sebastian, Shanghai, Turin, Trieste, Valencia, Zurich. He has participated in countless public commissioning projects on behalf of important institutions and has been awarded many prizes. His photographs are part of prestigious Italian and international public and private collections.

Within its vast work of reflection on the transformations of urbanized territories in the transition from the industrial to the post-industrial era, the theme of the city as a complex and refined product of the economy and history occupies a central place. Guided by a sincere passion and a lively admiration for the architecture and all the artifacts that have shaped cities over time, he chose the rigor of the documentary style to tell about the constant process of stratification and hybridization that models them, in a work of almost forty years of investigation of the relationship between man and built space.

Realized in collaboration with: the Gabriele Basilico Archive