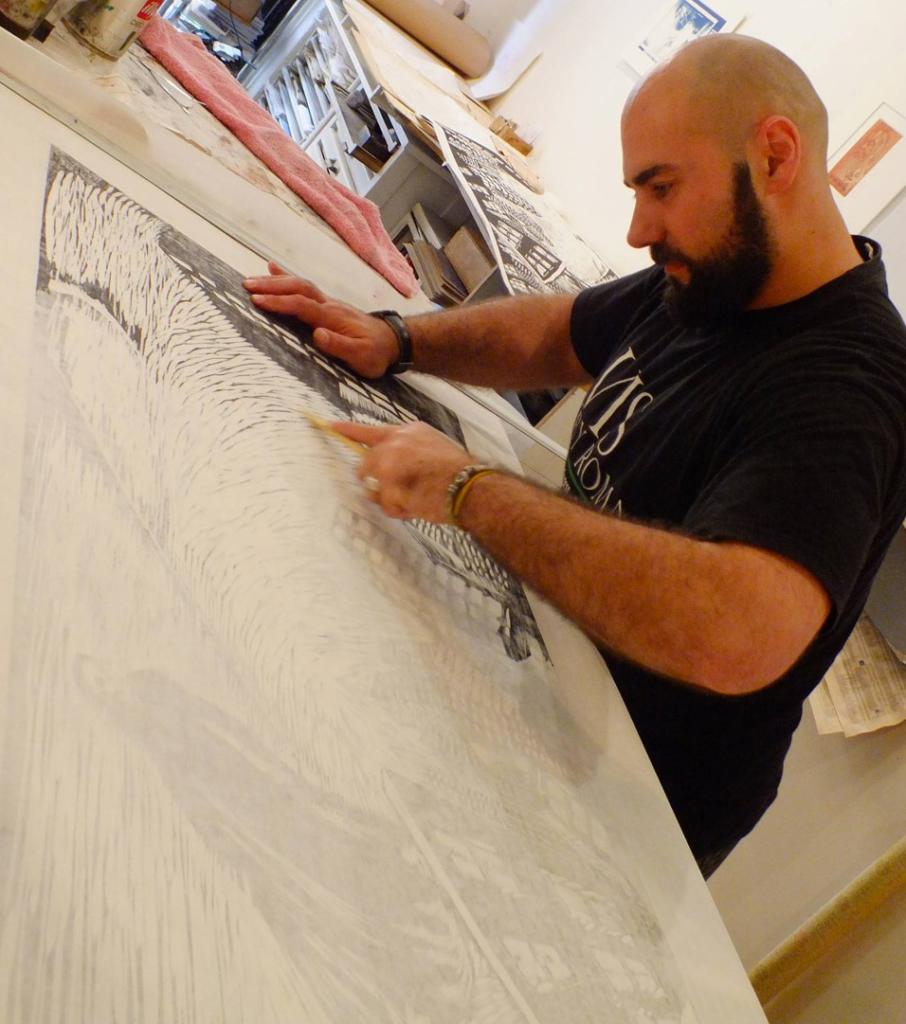 Leandro Lottici is in Rome with its museum exhibition entitled ” Visions 2015. Rome . Architectures for the Third Millennium ” . We are dealing with an artist unique!
Leandro is a great student of the subject , tract , especially a great technique . The exhibition of fine final yield , wants us to find a Rome of the Third Millennium .
The twenty new works that the artist has skillfully created for this exhibition , with many of the materials used by architects such as tar , industrial enamels , plastic , cement mortars , insulation panels , they give reflections , shadows , light / dark in a riot of shapes in freedom of expression. 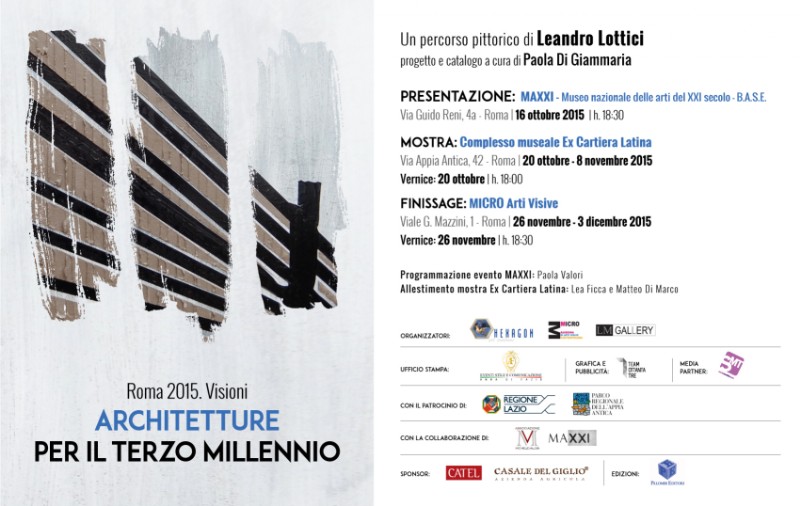 It ‘ a tribute to eight architects who have been involved in Rome : Xavier Busiri Vici , Santiago Calatrava , Massimiliano Fuksas , Zaha Hadid , Richard Meier , Renzo Piano , Paul Portuguese , Michele values ​​. They are great works that concern public areas that end up formally be private . Hard to put them all together these architects , but Leandro has done , with his works . Melodie architectural flows positive thoughts , visions of space full / empty sign that refer to a mood and give us real emotions. 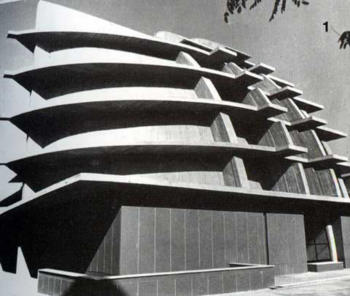 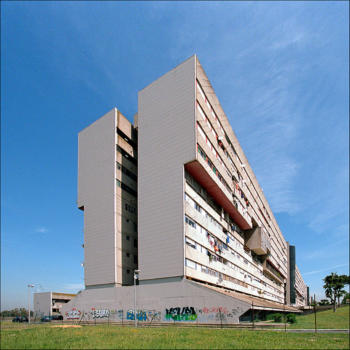 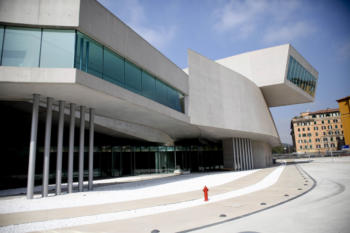 Leandro Lottici inspired by these great masters , today gives us works designed and produced with a real identity made ​​up of body and soul . The eye and sensitive artist enhances these large architectures freeing the box and offering unusual details , new views and regalandone an identity often unknown . Art helps us to understand that it is essential to give us what surprise to be achieved by a feeling of beauty . Let yourself be amazed by the work of Leandro Lottici …

Leandro tell us about your artistic career, where it takes you?

Mine is a sculptural path, all my works come from sculpture and back to it, even when I paint or woodcut. 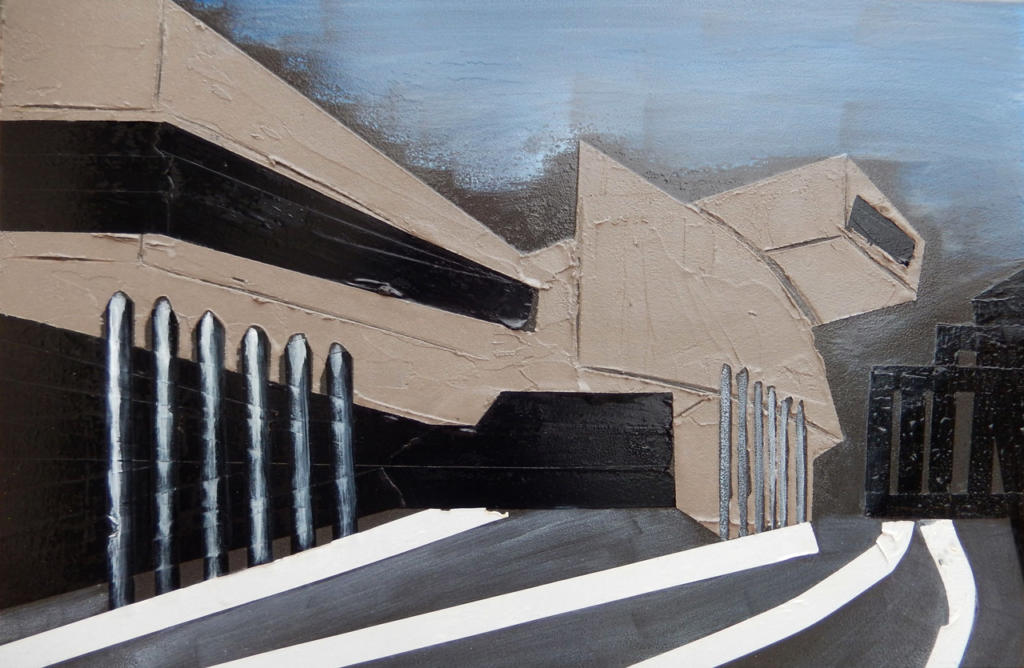 Have you a style and technique all staff, especially in the use of the material, it is a continuous search for you?

My early paintings (2003 – 2010 years) made through material research, testing of various building materials, instead my latest paintings made through color research. Especially in this last year my artistic research is focused on color, which is a huge effort for me because I only see infinite shades of gray, I am completely color blind. 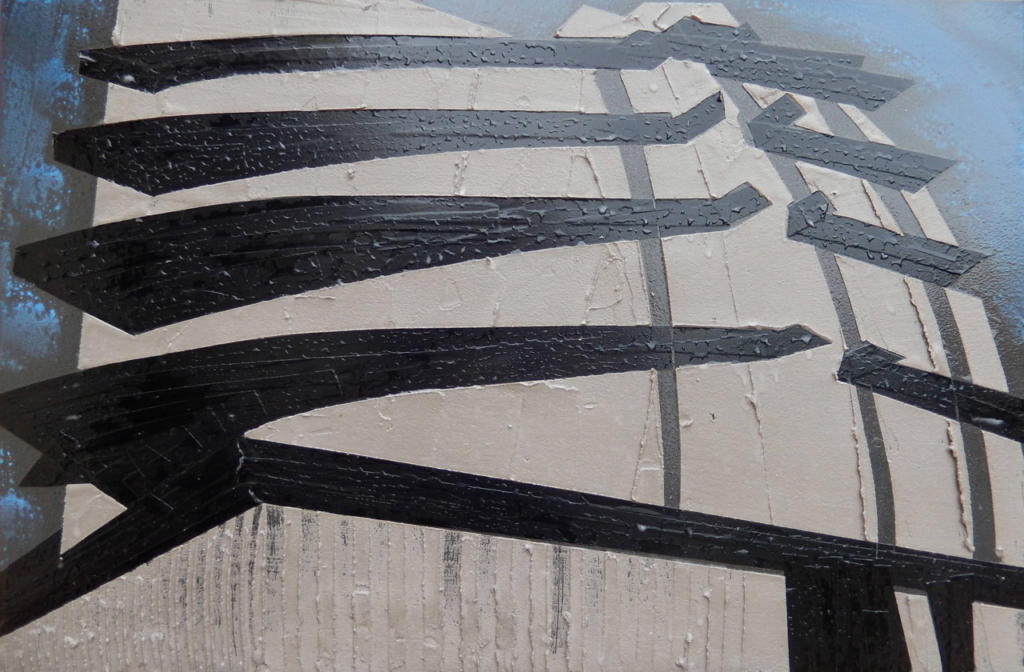 Painting or architecture, although very different, you shall join, but do you love most?

I am a sculptor and so I research and see in everything its 3D form: in my opinion a painting becomes a relief and a building or any architectural work becomes a sculpture in habitable size. Sculpture is the union point between painting and architecture.

… And your favorite artist??

My favorite sculptor, not painter, is Francesco Somaini 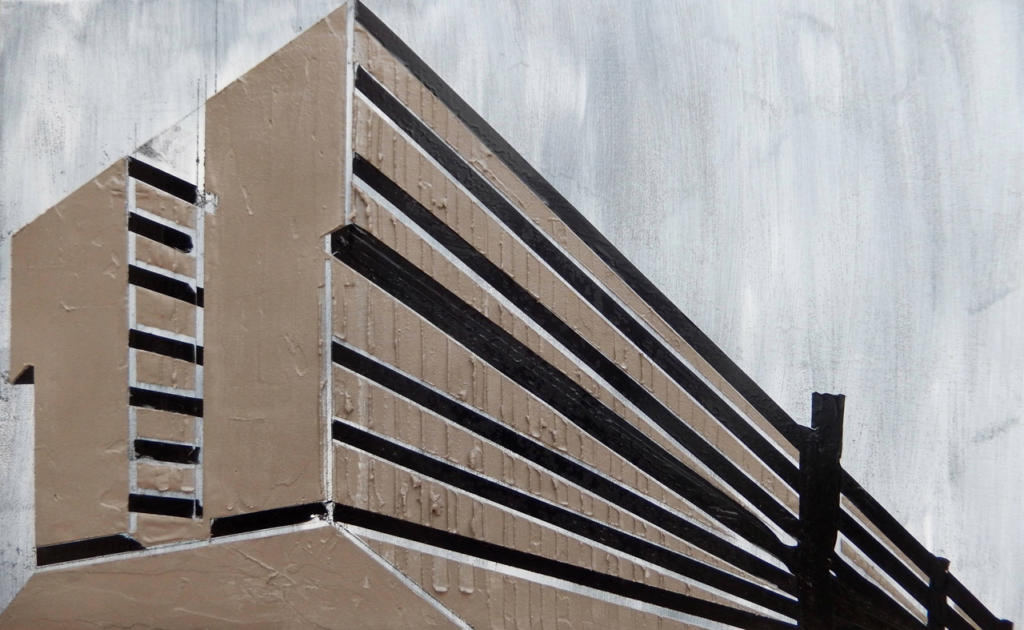 What would you tell in your works ?

Except Michele Valori’s ERP Corviale building and the gasometer, subjects that I have often painted, Rome certainly is not exactly my weltanschauung that is instead Milan, London, New York or Hangzhou. And so the Rome of the Third Millennium is what I would like to tell with these my paintings. Rome of the Third Millennium, the city where I was born and where I mostly live.

Rome is an ancient city and Romans love this: Romans think the twentieth century architectures are just “architectural monsters”. I would like to turn on a spotlight and make those buildings protagonists: Romans have an immense fortune to see masterpieces of ancient architecture next to the most examples of the vanguard architecture. Contemporaneity in Rome is not abused, simply it yet speak an unintelligible language for majority of its citizens.

The flow of positive thoughts come, related to visual sensations beyond matter … these are the feelings that you want to leave him?

Honestly I never thought about feelings that I send with my work. My works come from a project, but the final effect on people is very subjective to each one.

What would you give soul to the spectators?

Museum exhibition, presentations in different places, why this choice?

I answer by quoting the words of the project’s curator Paola Di Giammaria “this project shows a hidden Rome, unknown to most people. Leandro Lottici takes us on a journey of experiencing Rome as a modern and contemporary town. Without drawing on the long established debate that poses a choice between the ancient ruins and the often misunderstood and not accepted aspect of modernity, this exhibition aims to highlight the architecture of Rome from the last thirty years of the twentieth century to the present day “, for these reasons Paola considered my project as something addressed the community and therefore worthy of the highest visibility.

I was then lucky enough to receive the financial support of the Franz Ludwig Catel Foundation (project partner), and the logistic support of the Michele Valori Association, in collaboration with the Paola Volori’s Micro, thanks to them I got to the MAXXI.

So how did the young LM Gallery in Latina (thanks to its founders Lea Ficca and Matteo Di Marco) who have followed and will follow any stage of the central exhibition in museum space of Cartiera Latina in Rome.

I’m leaving tomorrow to the BOCS in Cosenza, the most prestigious among artistic residencies in Italy, guest at Art in Residence online platform, a project curated by Alberto Dambruoso artistic director of I Martedi Critici.

Except groups exhibitions in Rome and Milan in November, at Christmas time I will go to my friend Paolo Sgroi (former assistant of the master printer Giorgio Upiglio) in order to print the Dance of Death, five woodcuts made in six impressive woodblocks of 560 x 1160 mm sizes, commissioned by Philobiblon and curated by Matteo Ghirighini.

My 2016 … I will not say anything for good luck, but it will be a year of very intense and appropriate level of what this project started.

At the end,  the always ask respondents that I interview … Leandro made ​​you a question that no one ever asked you ( and so you wanted to hear you ask ) and replay….

Your past course of study is not strictly Academy of Fine Arts, where it comes from?

I had three teachers who I met in the middle and high school, Angelo Lattanzi (italian and history), Paolo Armellini (philosophy) and Paolo De Gregori (English language and literature), these three great men opened my mind, making me range from Alexis De Tocqueville to Selma Lagerlöf, from George Lequier to Francesco Colonna, from the Epic of Gilgamesh to Lautréamont.

The exhibition Leandro Lottici entitled ” Visions 2015. Rome.Architectures for the Third Millennium ” is waiting for you from 20 October to 8 November 2015 in the Complesso museale della Ex Cartiera Latina, in Via Appia Antica 42, 00179 Rome.

The Serpent alongside the Ara Pacis in the exhibition.