To visit the Ara Pacis today means to jump in the past until its origin in the 10 b.c. The ARA AS IT WAS is a suggestive initiative of augmented and virtual reality of one of the most important masterpieces of the Roman art, the altar built by Augustus to celebrate peace after the conquest’s campaign in Gallia and Spain. Modern technologies allow the monument 3D restoration in all its beauty and the reproduction of the virtual Ancient Rome.

TECHNOLOGY: AUGMENTED AND VIRTUAL REALITY
Until January, 6th, 2019, you can enjoy these virtual worlds thanks to multimedia technologies and computer graphics. An innovative experience of augmented and immersive reality trough special visors (Gear VR), according to the studies and reconstructions of the Sovrintendenza Capitolina ai Beni Culturali. The character’s voices are those of Luca Ward and Manuela Mandracchia, while the organization is by Zetema.

THE ROUTE OF THE VISIT
The visit is divided into 9 points of interest. Think flying and floating on the altar with a 360° view, to soar over the Campo Martius and take part in the sacrificial scene performed by real actors, always in the middle of the scene. You can enjoy the marble surfaces with Enea’ sacrifice, the birth of Romolo and Remo, characters, actions, divinities and animals that reproduce the origin of Rome and Augustus’ family. Ministers’ figure on the Lungotevere side allow rebuilding the restoration and complex events of the monument during modern times.

You go through up to goddess Tellus and goddess Rome, sit on the defeated arms. Here the original colours reveal the functions and meanings of the characters of the reliefs. Rich in symbols is also the vegetal decoration below, a luxury garden that stands for immortality.

At the and of the route the relief of Emperor Augustus followed by his family, ministers and so on. A solemn parade, all together for the first time on a public monument.

MESSAGE TO THE POSTERITY
Great not only the beauty of the altar and the suggestive virtual dimension but also the message of the reliefs to the posterity not to forget the origin of Rome and the Augustus’ family, that merge to become a powerful Empire and its own dynasty.

For further information about the Museum and the fascinating history of the altar’s rescue visit the website  http://www.arapacis.it/ 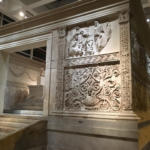 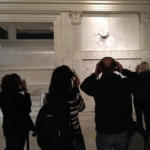 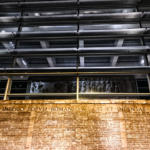 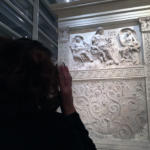