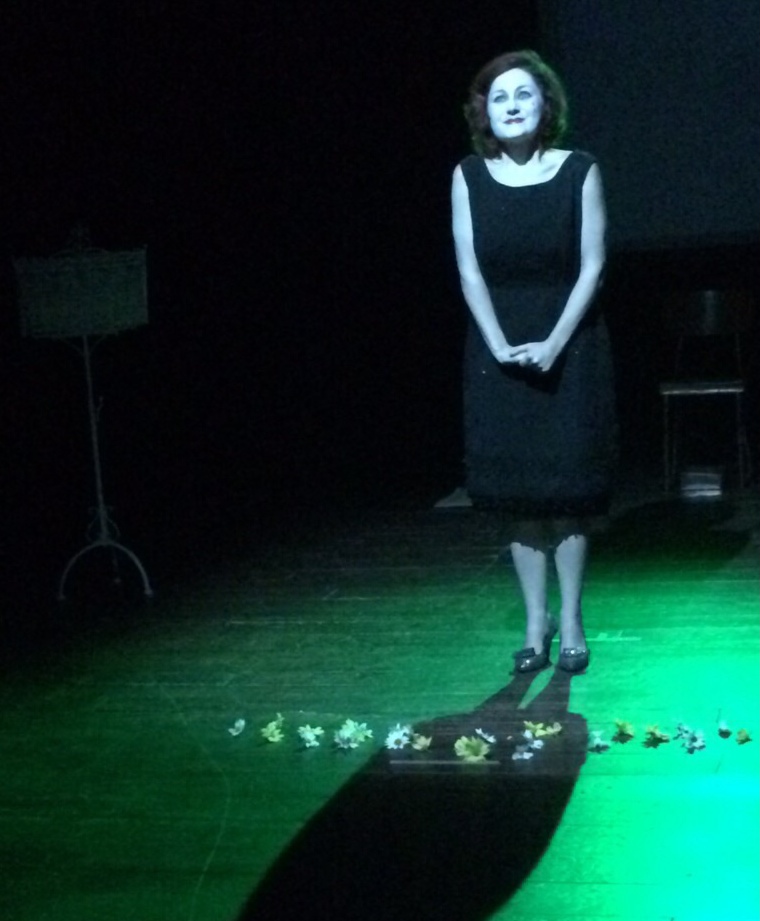 Caterina Gramaglia, back on stage the second time in November for the feminine theatre review Her.s at Teatro dell’Orologio, after performances repeat between Rome and London in the same month of her The White Room, holds still and well balanced, with precise charm, the fíl rouge of narration, rythm, evocation, tones and wonder. And this is the very fíl rouge of her own as precise message, as author and actress .

This time she offered to her attentive audience, the debut on stage of Le Lacrime di Giulietta, her most personal and private tribute to Giulietta Masina.

In this homage to Giulietta she masters with delicate knowledge the narrative voice, mime, the singing voice, the humor, the set design, then, as Masina’s dress and glittery shoe, as Gelsomina’s cape, cap and booties in ‘ La Strada ‘. Last but not least her devotion, loss and trust. She, Caterina Gramaglia, croquis of older times, has bravely shared with us her most intimate homage to her own Musa, Giulietta Masina.

Giulietta’s Spirits, Caterina Gramaglia does embody them, with deep respectful care, to return them to us and not leave them no more to oblivion. It does then happens that each Spirit of Giulietta will leave the stage with us, individual viewer, touched and enwrapped by Gramaglia’s invisible thread, to continue to inspire our steps now, in our life, while Gramaglia will then go backstage to wear back her own human clothes.

Le Lacrime di Giulietta inevitably become our emotion, for a young artist whom is as visionary as capable.

And one day, she, Caterina Gramaglia, will be having to repeat to us the words of Federico Fellini that Night of the Oscars when, two decades ago Los Angeles at the Academy Awards, he was handed his Lifetime Achievement Award, when from the stage, holding emotions and prize, he thanked his wife, Giulietta, and tell us ” … and now please , stop crying .”