Jon One arrives in Rome with his first great solo show! He is one of the most famous writers in the world known for his material graffiti, born in Harlem, he lives in France today. He collaborates with international brands such as Lacoste, Perrier, Air France and Guerlain. It is said: “I have not received any artistic education, I never imagined that one day I would have expressed myself on canvas!”. From the road to the Museum, the artist has distinguished himself in recent years by exhibiting in various galleries around the world from Hong Kong to Zurich, from Los Angeles to Tel Aviv, from Seoul to Moscow.

The exhibition entitled “Niente può fermarmi – nothing can stop me” was inaugurated in Rome on March 17, 2018. Jon One presents his first solo exhibition in Rome, perfect between graffiti and abstract expressionism, curated by Giuseppe Pizzuto for the Wunderkammern gallery.

Exposes 20 unpublished works of large format specially made for the occasion. The exhibition is located in the prestigious Palazzo Velli, building ‘400 in the heart of Trastevere, and can be visited until April 14, 2018. 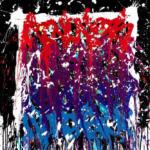 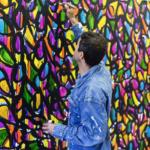 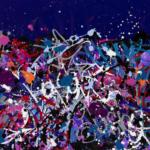 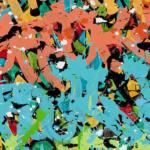 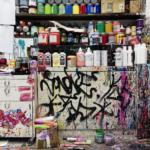 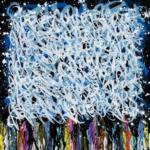 Jon One has created his own technique based on calligraphy, inserting color and pictorial material that he has been working with dexterity since he was a child. It emanates an emotional material energy that expresses through color, creating light and brilliance, with great technique and research. In his abstract expressionism we find influences from Jackson Pollock to Jean Dubuffet and inspired from the beginning to Jean-Michel Basquiat, characteristic of the abstract style with aerodynamic brushstrokes, drips, motifs inspired by the architecture or infrastructure of the city … In 2015, the artist decorated the entire outer shell of a Boeing 777 Air France aircraft. Continue to live and work between New York and Paris. 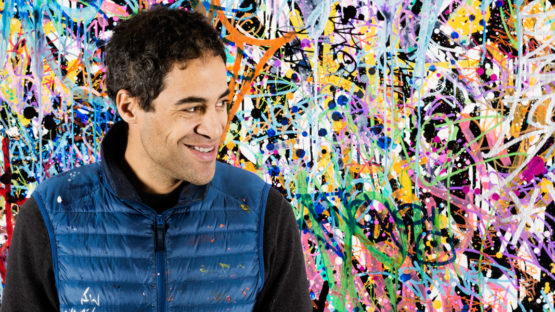 Jon One – (John Andrew Perello, 1963, New York, USA ) Was born in 1963, in Harlem, a large neighborhood of New York City. Juggling between failing at school and family troubles at home meant that this young man could not avoid the everyday life of endangered teenagers and could only embrace the education the streets themselves offered.

At 17, he started graffiti. Thanks to the recognition he gained from his work on the New York metro line A, John created, with the support of several committed graffiti artists, the renowned international community 156 All Starz, in 1984, and became Jonone. During his early years, he met his French counterpart, Bando, who invited him instantly to Paris. John browsed the Parisian sidewalk, accompanied by the pioneers of French Hip-Hop, and started to produce paintings in the heart of an open-aired workshop at the Éphémère hospital. Magda Danysz, Marcel Strouk and even David Pluskwa have exhibited his work. His pieces were priviliged enough to be displayed in Tokyo, Monaco, New York and Hong Kong.

In the underground or under the light of a gallery, Jonone has a firm grip on his fiancée called France and is not planning on leaving her anytime soon.

John still lives in Paris and now has two children. His workshop is located in the East at Mairie des Lilas.

Title: JonOne Nothing can stop me

entry on the Anglo-Saxon model of “pay what you want”: Monday, Tuesday, Wednesday

from Thursday to Saturday, 11 am-9pm