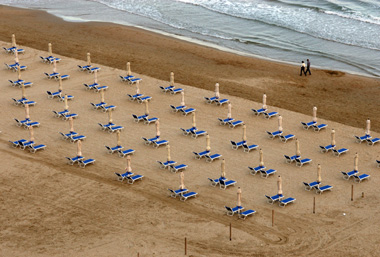 Sperlonga is a splendid seaside village perched on top of a cliff overlooking the water, and dominated by an old tower (Torre Truglia). Its Mediterranean look has remained unchanged, where its white houses are built up against one another, and narrow streets (where no more than two people can walk abreast) are full of nice artisan shops.  There are staircases and breathtaking terraces overlooking the sea. Sperlonga is in a very picturesque corner of the world where one can come to spend a romantic weekend.

The name comes from the natural caves (speluncae) that open out onto the coastline. The best known is Tiberius’ Cave at the far end of the “Angolo” (Corner) beach that was part of the settlement where the Emperor Tiberius decided to build his holiday residence.
Within the cave there are fragments of huge sculptures which once dominated the artificial fishponds at the cave’s mouth.
These mythological works have been painstakingly reconstructed, and you can see them in the modern Archaeological museum of Sperlonga which is situated near “Tiberius Grotto” just 2 km south of the village (Address: Via Flacca, Km. 16.250  tel.+39 0771.548028).
Following a path outside the museum (one admission ticket covers the entire site), you arrive at the villa ruins, and the cave itself. The location is very atmospheric, and if you’re lucky you may have the spot to yourself; the museum is not a busy one.  (please notice that you won’t be allowed in wearing a bathing suit).
Sperlonga boasts one of the cleanest seas in the Lazio region, and for several years it has gained the European blue flag for the pureness of its water. The  long and wide golden shores of fine sand are also a main attraction. The village is flanked to the west and to the east by two long beaches, separated by a rocky spit on which the Torre Truglia stands. The western beach, with its hotels, goes on for 10 km to Terracina. The last few years have seen an increase in beach establishments offering facilities and refreshments six months a year.

Two small lakes, called the eyes of Sperlonga, add charm to the landscape. The Lago Lungo is separated from the sea by only a narrow line of dunes. The Lago San Puoto or San Potito has few fish, but rich vegetation, and is home to many rare lake birds. The lake is named after a small church and monastery built there at the end of the XII century and dedicated to San Puoto.
If you have more days to spend in the neighborhoods, don’t miss the islands of Ponza and Ventontene; it is possible to reach them by boat from the harbor of Terracina, a village 10 km from Sperlonga.
Enjoy the sea, the sun, and don’t forget your protective cream!