From 4 to 16 November at the Teatro India Rome 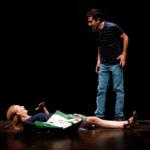 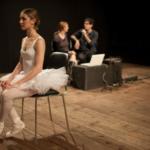 The Theatre of Rome dedicated a retrospective to the work of the company Deflorian / Tagliarini that 4 to 16 November inhabit the India Theatre with the Trilogy of the invisible, the theater complex project that consists of 4 shows, 4 games to 1 mise en espace . A mosaic of words, images, feelings and thoughts, to make visible to the public those threads that made up their creative process.

Thus, the well-matched pair of art presents to the public the shows produced since 2008, Rewind – a tribute to Pina Bausch’s Café Müller, rzeczy / things and Reality, and the more recent We’re going to give you no other concerns; A workshop about the upcoming production of the company; a meeting / confrontation between Lorenzo and Petros Pavolini Markaris (author of the novel on which it was born We’re going to give you no other concerns) on the crisis, the presentation of the book, edited by Graziano Graziani, who collects all the texts of works the company, a dialogue between Christian and Walter Raimo Sites on the “craze of reality,” a meeting between Jean Laurent and Gianfranco Capitta Sasportes, historical dancer Pina Bausch Company; and, finally, the mise en espace May twenty-first century – bankruptcy is a quality of the soul ?.

With the Trilogy of the invisible, a production of the Theatre of Rome, the artist couple brings to the stage a vast material insecurity, loneliness split, prospects negligible, fragments of pain, which form and penetrate the mesh of our contemporary. They drive their actions on, share them with the public and bring them to life to break the boundary between performer and character. A gear in which visible and invisible meet to become the two poles of a crucial question: “on the one hand, the scene is crucial not to say everything, but hide the causes in the effects – comment Deflorian / Tagliarini – on the other hand, the dialogue and debate are indispensable to the nature of the theatrical event. “Thus, under the eyes of the public and put on trial for their lives for their representativeness and their veracity.

It starts November 4 to 9 with We’re going to give you no other concerns, an image inspired by the novel The collector of the writer Petros greek Markaris. In the midst of the Greek economic crisis, are found the bodies of four elderly pensioners who have taken their lives voluntarily. “We realized that we weight the state, physicians, pharmacists and society as a whole – say pensioners in their message – Then we go to not give other concerns. You’ll save on our pensions and live better. “The show is a journey into these figures you do not know anything outside of their tragic end. After its debut in 2013, the tour that also saw the debut of Paris, the show returned to Rome in a revised version that offers the public a new ending.

Continue on 11 and 12 November with rzeczy / things and 13 and November 14 with Reality, born from two jobs reports by Mariusz Szczygieł, Reality, which tells the extraordinary testimony left by Janina Turek, Polish housewife who for more than fifty ‘years meticulously wrote down‘ data ‘of his life without any comment. How many phone calls he had received at home and who had called (38 196); where and whom he had met by chance and greeted with a “hello” (23 397); how many times he had played dominoes (19); how many times she went to the theater (110); those who had seen television programs (70 042). 748 books found at his death in 2000 by his daughter unaware and shocked. rzeczy / Things and Reality are two shows that explore around the things that fill our lives, how are the “gods of our daily lives,” as in the fact that without the public, consists in being trivial and special, unique and anonymous on what it means to have the daily horizon. They go so stage a series of short circuits between the figure of Janina, Deflorian / Tagliarini, the public and the perception of reality.

Finally, on 15 and 16 November the first show back on the scene (2008) by Deflorian / Tagliarini, Rewind – a tribute to Pina Bausch’s Café Müller, where the video of the historic show of 1978 is only told the audience, never to show it, with the vagaries trying to verbalize the experience of the authors, viewers here, in front of the work of Bausch and nostalgia we feel for something we can not return.

A corollary of the shows, for the first time in Rome will present the mise en espace May XXI CENTURY – Bankruptcy is a quality of the soul? Fernando Renjifo, Desk on the protests of the Indignados in Madrid (November 8, at 18).

In addition, four events: a meeting with Petros Markaris and Lorenzo Pavolini on the crisis (November 4, at 18); the presentation of the book Unseen Trilogy, by Graziano Graziani (Titivillus Editions), which includes essays and texts of the papers presented at the Teatro India (November 10, 18 hours in room Squarzina the Teatro Argentina); dialogue on the craze of reality between Christian and Walter Raimo Sites (November 14, at 18); Finally, the historical dancer Pina Bausch, Jean Laurent Sasportes will be interviewed by Gianfranco Capitta (November 16, at 15).

We’re going to give you no other concerns

FROM REPORT OF Mariusz Szczygieł Reality

Service entrance for artists and the disabled: 6 Via Luigi Pierantoni

The bus stop for the following lines is just a short walk from the Theatre:

no. 170 (stops by the Marconi Metro B Station; end of the line in Piazza Venezia

no. 766 (stops by the Basilica San Paolo Metro B Station; end of the line at Trastevere Station)

no. 780 (travels to Piazza Venezia, stopping by Viale Trastevere)

no. 781 (travels to the Magliana area and Piazza Venezia, along the same route as the no. 170 from Viale Marconi).