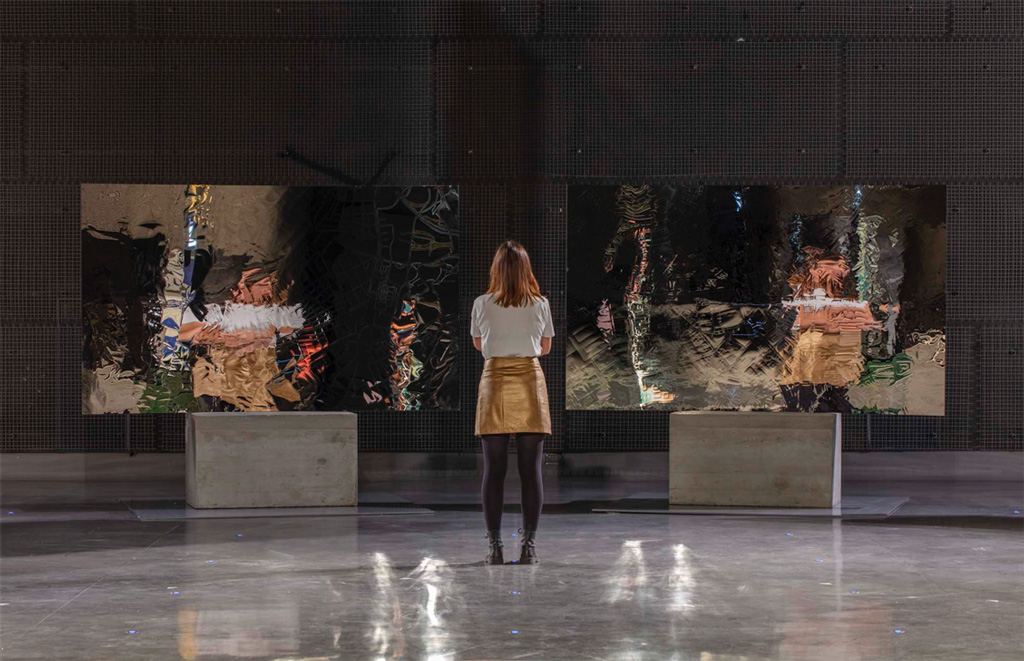 At a time when for most of us traveling has become a distant memory, at the Milan Malpensa airport you will find the large installation: “A portrait of anyone, anywhere” by Daniele Sigalot, which allows us to travel around the world in 50 steps. The exhibition will remain visible to the public until October, 2021.

The monumental installation, born from the collaboration between Daniele Sigalot and the company Wetzel & Magistris, consists of 12 maps of 12 cities laser engraved on polished steel plates and arranged in a circle 35 meters in diameter. To see and see again, in the cities and travels that we miss so much, from New York to Sydney, from Istanbul to Rome or Barcelona, is exactly what happens, where the artist transforms cities into large mirrors capable of involving and distorting the image of those who are reflected in them. 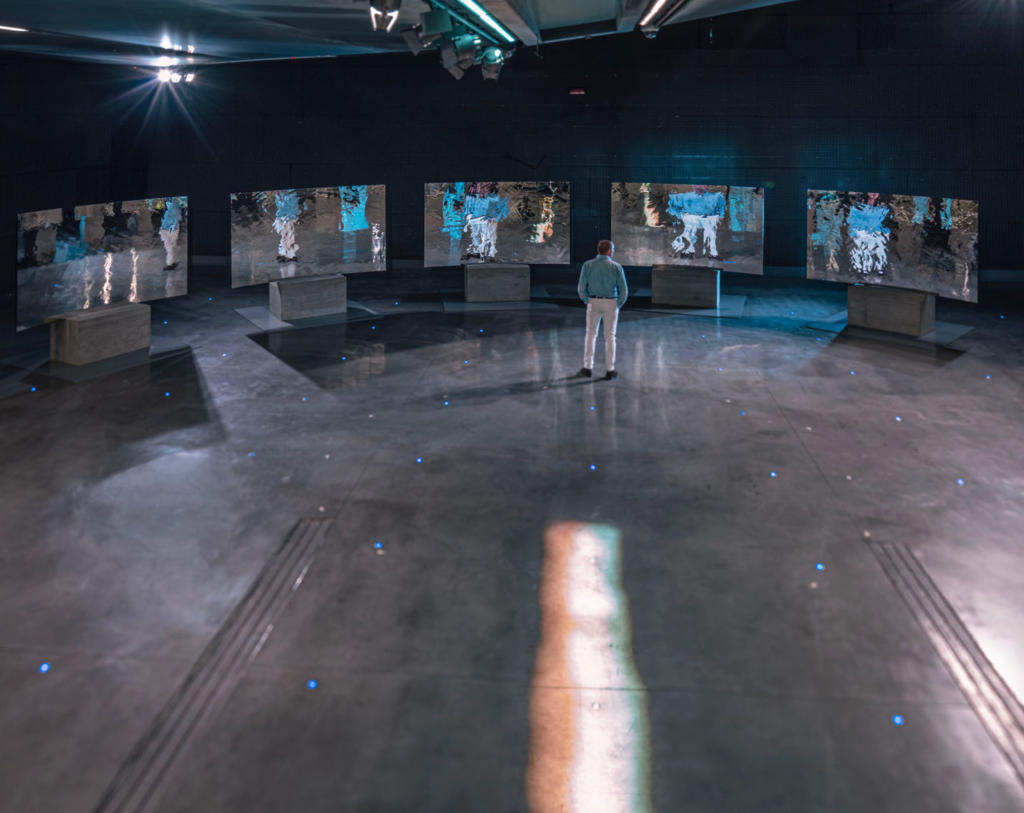 When someone is mirrored in one of these plates, the image that is returned is a kaleidoscope of features reshaped and shaped by the streets and buildings of the city engraved on steel. A project curated by Luca Beatrice and realized in collaboration with Wetzel & Magistris, under the patronage of SEA – Milan Airports and the Municipality of Milan, the installation was set up at the Milan Gate at Terminal 1 of Milan Malpensa Airport. 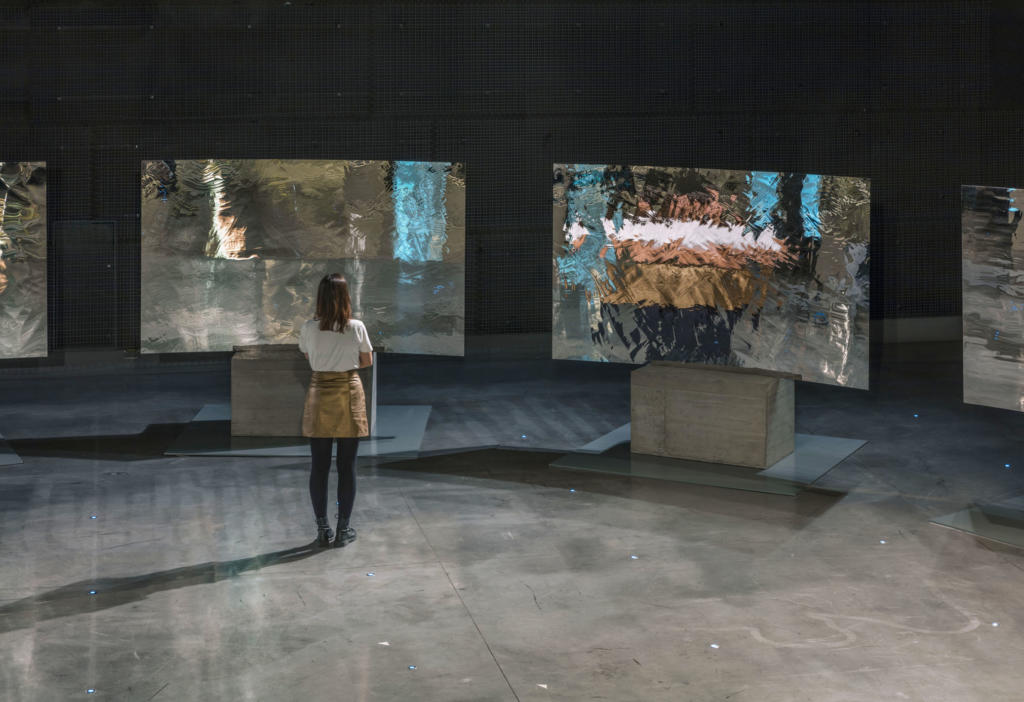 “The cities where we are born and choose to live shape and transform us. I’m from Rome, explains Daniele Sigalot, but I started working in Milan, then I lived in Barcelona, London, Berlin and now Naples. And each city has contributed to changing me, both morally and physically. I wanted to transform this thought into a work, and the simplest thing seemed to me to be to engrave a map on a glossy surface in order to superimpose the topography of a city on the features of a face. And it is precisely when this sum is realized that the work is accomplished.” 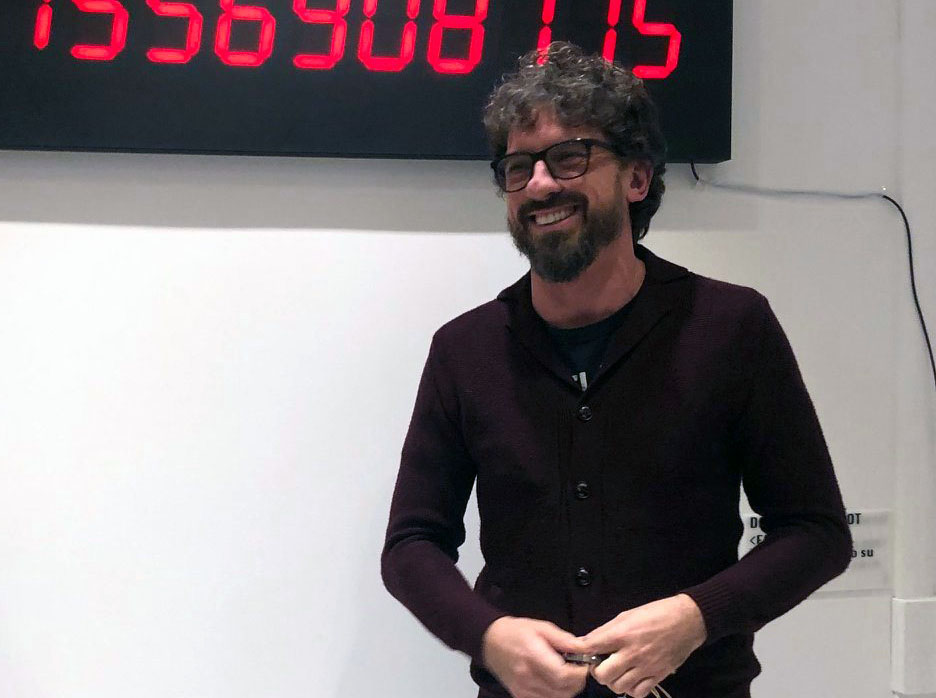 The works create an “osmosis” with the public, its realization in the concrete involvement in an individual relationship that each user brings to the work itself depending on which city of the heart he chooses, determining each time an original and unexpected result within himself. The artist creates a personal desire in the direct relationship with his audience through a participatory work and dynamics new from what can happen in an environment like the space of Milan Malpensa; the space becomes a place that represents the collective heritage for which the artist has a duty to claim responsibility, as a meeting place and dialogue of the entire community, not only of that segment participating in the art system, but of all. 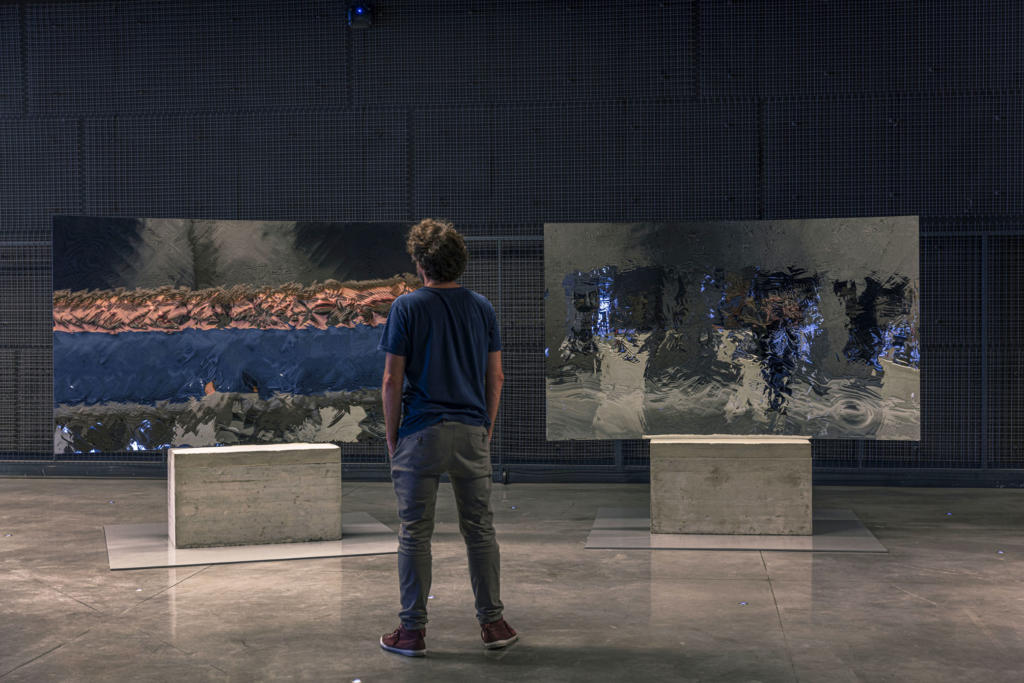 Do not miss this participation to be admired and shared since October 2020. The installation will be featured in a catalog published by Skira (December 2020).

Let’s interview Daniele Sigalot on this occasion of the exhibition in Milan Malpensa:

1) Daniele let’s take a step back, how did your path in the art world start?
From an accident. I didn’t want to be an artist. I was working in advertising, to be precise I was a copywriter for Saatchi&Saatchi London, and after working for 6 months on the launch campaign for a new Barilla product, the Barilla brothers trashed our work with a lapidary “we asked you for a dream, you gave us a nightmare”. It was then in the bathrooms of Barilla, which by the way exhibits in its offices a collection of stellar art, that my art director and I decided to resign and dedicate ourselves to a strange project that was born from a comic called Blue and Joy and that in a few years instead of publishing derailed into the art world. Until 2014, therefore, I worked within a duo that took the name of that comic strip, but since 2015 each of us has taken his own path in art. In short, it’s the Barilla brothers’ fault that I’m an artist.

2) “Nothing is more necessary than the superfluous” asserted Oscar Wilde, it means that the inessential is more useful than we think and make room in our lives with the art of the essential, what do you think? It’s the wonderful paradox of art, which has no function other than being indispensable and giving answers to questions that are not there.

3) You create installations of great artistic-social-anthropological significance, what do you want to tell? Thank you, the question is flattering, actually I just try to do something beautiful, and engaging, to compensate for the fact that I can’t play football well enough to be able to afford to make a living being a footballer.

4) Is getting to know other art forms important? Which one do you align with the most? Affinity with any artist of the 1900s? What name is most significant and why? I have the deepest admiration for Alighiero Boetti and Gino de Dominicis. I would like to have their lightness, which was never superficial. They seem to me to be two goliardi of art, and I’d like to share the joy and courage of that spirit.

5) Let’s talk about the making of this installation with large works on display, these very important chromatic elements, how did you make them? And how long did it take you to make them? The Malpensa installation was made entirely at WEM – empowering art platform. A factory in Piedmont that 3 years ago began to diversify its production, previously focused on automotive, to make works for different artists. I spent the 3 months preceding the installation right at WEM, to follow all the phases, from the design, to the engraving of the plates, to the realization of the frames and the cement bases, to end with the very delicate and stressful phase of transportation and installation in Malpensa. Imagine that we moved and set up 13 tons of works, without losing a single finger. 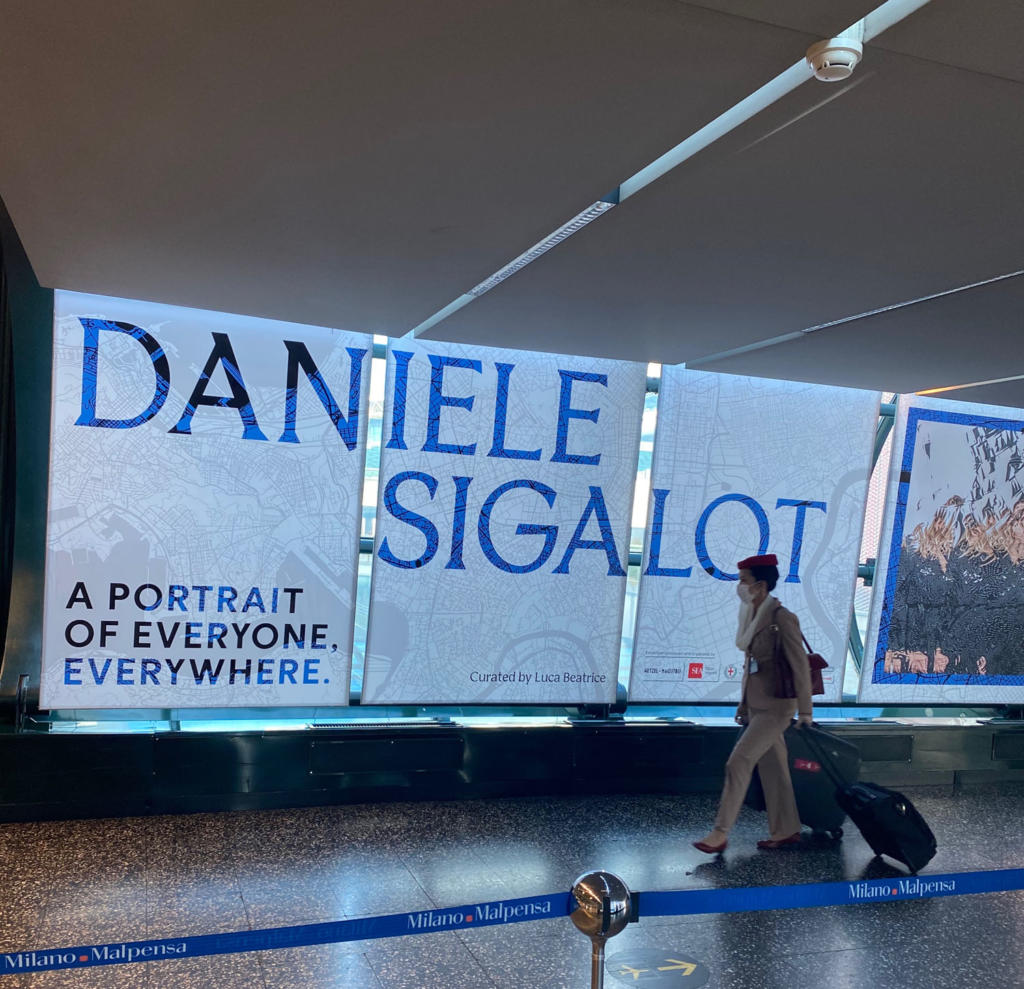 6) Do we find a certain dualism in these works, depending on how you see yourself? More than dualism, the thing that interests me is the transformation and multiplication of the ego. Inside each of us there are different people, or different faces of the same person. In the Malpensa installation, if you put yourself in the right spot, you can see all these identities posing together.

7) Traveling through your works, let’s say they create an osmosis, what do you want to leave to your viewer? I would like them to lose their flight because they are “stuck” in the installation.

8) What do you think about the art system today and what should be improved in your opinion? I would like to have some answers to this question but the art system is sometimes much more complicated and inexplicable than some cryptic and incomprehensible works of art. 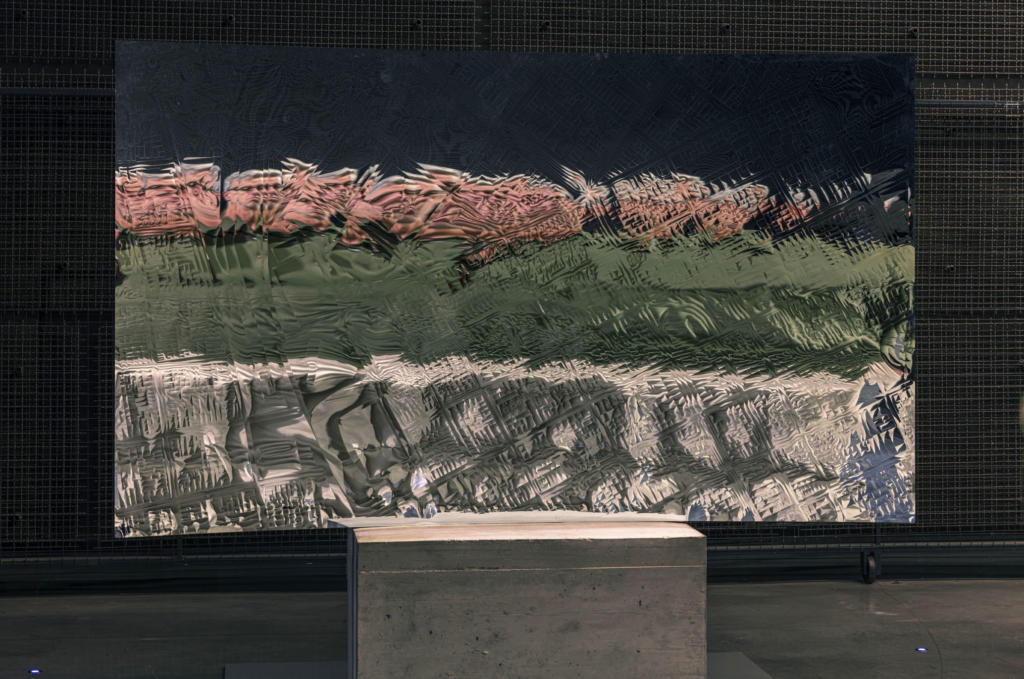 9) For the exhibition you have created a beautiful catalog by skira, your experience? First of all, I would like to advise you never to put the part dedicated to thanks, because you always end up forgetting someone and this inevitably creates sorrow. For the rest, I am very happy with the volume, which in addition to the Malpensa exhibition contains a good summary of the last 7 years of work,

10) What did this last exhibition experience leave you with? Many hours of sleep lost, a few more wrinkles, but also the pride of having been able to complete a project that was born more than three years ago and that has involved an infinite chain of people to whom I am very grateful.

11) To finish, let’s talk about your activity, next projects, can you mention some curiosities? And wishes? We have talked about many things, but not about one of the projects to which I am most attached: Race Pizzeria. My studio is called La Pizzeria. It has this name because when I opened it, in Berlin, I enjoyed making fun of the stereotype that sees us Italians as good only in the kitchen. Then, when I moved to Naples, it seemed appropriate to give it a name. 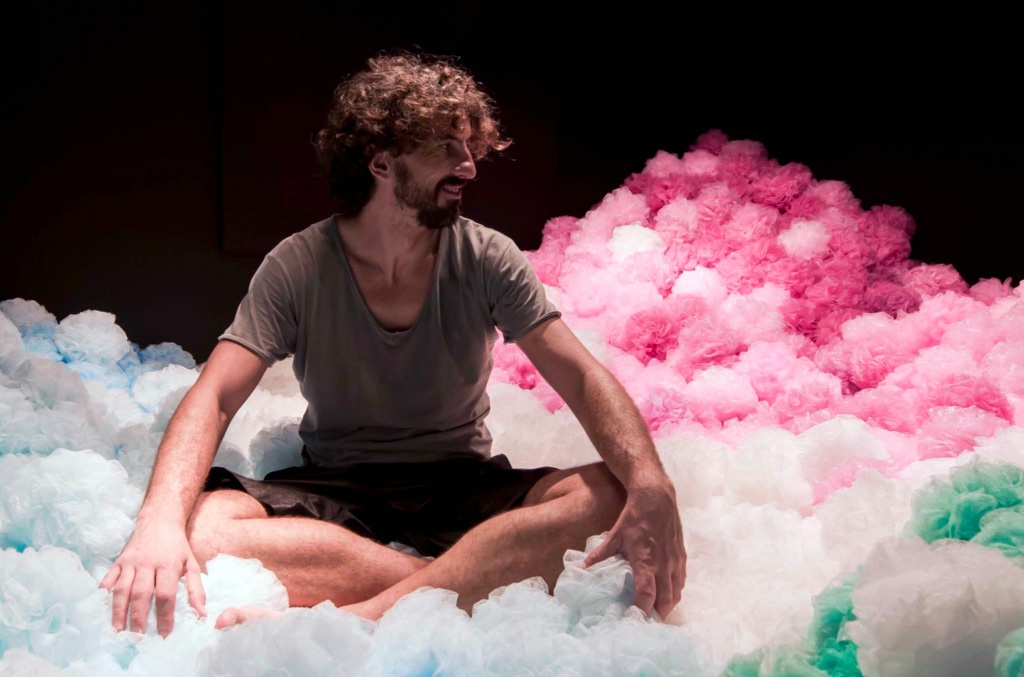 DANIELE SIGALOT: After 7 years in advertising without being able to convince anyone to buy things they didn’t need, Daniele Sigalot (born in Rome, 1976) decided to move into the world of art, where the superfluous is more necessary. So he leaves Saatchi & Saatchi London to move to Berlin, where in order not to disappoint stereotypes he calls his studio La Pizzeria. His works have been shown in more than 40 exhibitions around the world, including solo shows at Reggia di Caserta, MOAD in Miami, Palazzo Ducale in Genoa, Triennale in Milan and Palazzo Reale in Naples. As of 2019, he moved his studio to Naples where he finally found the order and organization that the German capital lacked

One comment to “A portrait of anyone, anywhere by Daniele Sigalot, departing from Milan Malpensa Airport”