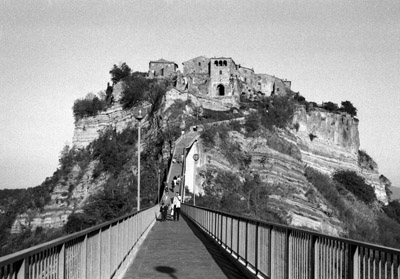 Should you be unprepared for such a view, you’ll probably be driven to think that such a village belongs to another era, maybe to another world. Isolated on a tuffaceous hill, 462 meters high (1516 feet), Civita is a small village made up of a few tumbled down houses and some restored buildings, re-created recently according to their original aspects. You get the best view of the village from the nearby hill, more exactly, from the panoramic site in Bagno Regio, from which Civita is fully visible, like a giant-size mushroom with its tuffaceous stalk. From the panoramic viewpoint, a steep footbridge starts to connect Bagno Regio to its small hamlet, Civita. 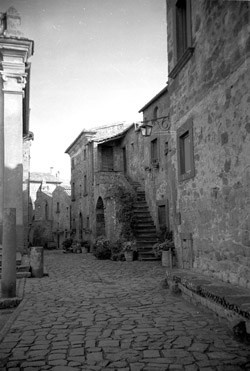 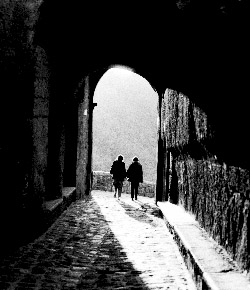 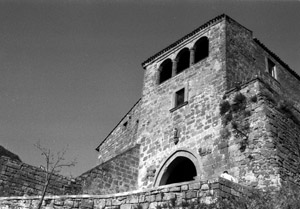 The 300 meter long bridge is the only way to reach the ancient ‘borgo’, since the natural passage was destroyed by one of the numerous earthquakes over the centuries. Considering the peculiarity of the soil, made of tuff situated upon clay stratums, such terrible events were to add to the destructive work of erosion, which provoked frequent cases of collapse, and thus brought Civita to a slow depopulation. That’s why Civita was given the name ‘the dying town’: a village which is fated to disappear, crumbling day after day into the valley below. Nevertheless, this was also its fortune! The small town was abandoned and left as it was, instead of being disfigured like many other villages in Italy. Crossing the new bridge (built at the end of the 60’s, and quite ugly), you get to Porta S. Maria, the medieval gate that is the main entrance to the village. While walking in the narrow alleys, you perceive a strange atmosphere, as if centuries have never passed. You are thrown into a place where time has stopped long ago, leaving things unchanged and without any sort of human warmth. However, there are eight inhabitants who live here! I wonder where they are hiding or what they can do in such a lonely place… especially in the cold winter. The barman tells us that nobody has lived here for a long time, and that the few shopkeepers are not local. They are, like himself, native of some distant village. Moreover, we get to know that since Americans and other wealthy foreigners have started to buy all the village houses, the prices have risen, being impossible to buy even a decrepit building. We are very surprised at this information, and a little bit disappointed, having a feeling that what we see is just a place for tourists, and lacking in real life. Regretting the silence all around, we continue on our way, admiring the medieval houses with their outside stairs (called profferli) as well as the small Renaissance palaces of the Colasanti, Bocca and Alemanni families. In front of the church of S. Donato, where a Crucifix painted by the School of Donatello is kept, some columns remind us that a Roman forum was probably where the main square is now. The village actually was not founded in the medieval period, but much earlier: the first foundations date back to the Etruscan era, some 2500 years ago! In the past, donkeys were in charge of carrying the goods to the top of the hill, while today it takes a 4 wheel drive tractor to carry up everything the people need. It is the only power-driven means of transport allowed by the local authorities. You can imagine what a peaceful village this is! Neither cars nor ‘motorini’ around. There’s no other place like this in Italy, you can count on it! And we hope that ‘the dying town’ will stand firm for many more years.

How to get there:
From Rome take A1 towards Florence and get off at the exit ‘Orvieto’, then follow towards Castiglione Teverina and then Bagno Regio.

Where to eat: Hosteria del Ponte: On the street between Bagno Regio and Civita. It offers a perfect view of Civita from its terrace.