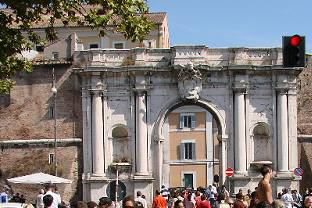 Italians love to shop.  If you ever drive on via Tuscolana and get stuck in traffic, you’ll notice many double-parked, and even triple-parked, cars in front of the many clothing and shoe stores.  Or perhaps, you had the experience of going to a shopping mall on a Saturday, drove around for a half hour looking for a parking space, gave up, then noticed a car pulling out of one, but when you got there another car had pulled into the space from an impossible angle, tempers flared and a shouting match ensued.  Then once again you gave up to go home, but this time with defeat and disgust.  This has been happening in Rome for centuries.
Shopping malls have been around a lot longer than you might think.  Imagine the chariots of Ancient Rome tailgating through traffic and honking their horns, horses double-parked, the flies, the odors amassing as a Roman dismounts his chariot and saunters into a toga store to check out the new autumn line.  This was probably the scene in front of Trajan’s Markets (Mercati di Traiano), built for the Emperor Trajan in the 2nd century A.D.  The building is located a short distance from the Coliseum, on via IV Novembre, 94 and you can see the original five level building where food, oil, pottery, flowers, imitation designer sandals, etc. were sold.  Most of the 150 shops are still intact and can be visited, but unfortunately there have no longer any goods to buy.

If you wake up one morning and notice your motorino is missing, or your camera was stolen while at Termini, there is a good chance it will turn up in Porta Portese.  This is the most famous and largest market in Rome.  Just about anything you imagine could be found here: antique furniture, rugs, mirrors, car parts, car stereos, clothes, shoes, herbs, kitchenware, and just about everything else.  If you see a group of people standing in the crowded walkways playing a game involving three tin cups under which one ball is hidden and you have to guess which; don’t, you’ll lose.  Porta Portese, located near Trastevere, is open every Sunday starting at 5am and closes around 2pm.

There is also a Porta Portese 2, located near via Prenestina and via Togliatti.  It is a much smaller version of the original, but you can still buy most everything.  It is open every Sunday from 6am-2pm.
Another famous market is the Mercato di via Sannio.  This market is less chaotic than Porta Portese, but not much less since the spectator also has to maneuver through a stream of cars,  as well as people, on via Sannio.  It specializes mainly in clothes.  Here, you’ll be able to find good second-hand, as well as new, clothes in what looks like a maze of little garden shacks.  The Mercato di via Sannio is located near San Giovanni on, you guessed it, via Sannio.  It is open 10am-1:30pm Mon-Fri; 10am-2pm Sat.
Borghetto Flaminio is open every Sunday 10-7.  You can find a little bit of everything here.  It is a short walk from Piazza del Popolo, or you can take the number 2 tram from Piazzale Flaminio.  It is located across the street from Piazza della Marina, in an old garage.  There is also a small entry charge of about ‘2. Some of the less famous markets are not open every week.  Some open the first Sunday of the month, some the third, some are supposed to be open the fourth Sunday, but aren’t.  Some still advertise but no longer exist.  Of these is the market in Piazza Verdi.  This is one of the nicer markets to walk around in and deals mainly in antiques.  There are bargains to be found here, so it’s best to arrive early in the morning.  It is open from sunup to sundown on the fourth Sunday of the month.

On the second Sunday of the month, you can venture to Anticaglie a Villa Glori, located on Viale Maresciallo Pilsudski, in Parioli.  Here you’ll find a large assortment of antique porcelain vases, furniture and paintings.  It is open Sat-Sun 9-8

Rome’s markets are densely crowded, so much so that it might be a good idea to put a lubricant on your clothes so you can squeeze through the people.  Also, if you don’t plan on buying anything, you should leave your wallet at home, but if you do take your wallet, keep it well guarded.  There are pickpockets and other such evil forces everywhere.

Porta Portese
Viale Trastevere
Sunday: 5am-2pm
A lot of everything

Portaportese 2
Between Via Togliatti and Via Prenestina
Metro stop Anagnina
Sunday: 6am-2pm
A little of everything

Big Deal
Via Cassia
Sundays: 9am-7pm
A little of everything