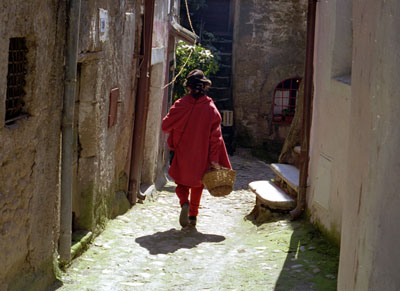 Upon reaching the deserted medieval village of Calcata, built on a big rock in the middle of a nature reserve, you seem to be entering an enchanted place.

A particular feeling comes over you while walking through these narrow streets that are coloured by the artists’ shops. You breathe a sense of freedom mingled with an ancient air: forget everything and discover this little world.

The origin of Calcata dates back to the prehistoric age with the discovery of traces of human life. Archaeological excavations uncovered the remains of an ancient Etruscan civilization within the necropolis. Many of these objects are now kept in the ‘Museo Nazionale dell’ Agro Falisco’ in Civita Castellana.

During the Roman age, the fertility of the land was the main reason for the settlement of a lot of rustic villas. The name of Calcata appears for the first time in a document at the end of the VIII century during the pontificate of Adrian I (772-795). In the last decades of the XIII century the noble family of Anguillara erected the castle and the walls. Before the First World War the medieval village began to be abandoned because of the frequent falling down of the tufaceos rock. A new centre was built just in front of the old one, but the ‘ancient’ village of Calcata knew a rebirth thanks to the artists that found in it a spiritual place where a more ‘natural’ way of living could inspire their creations. 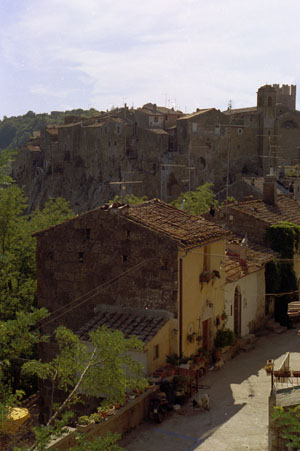 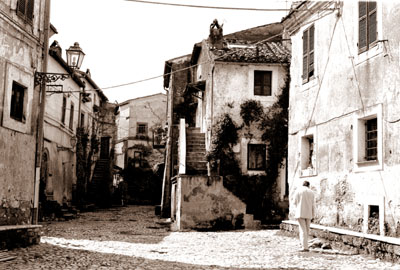 Inside the village, passing through the medieval door, a little picturesque square appears with the Church of ‘Santi Cornelio e Cipriano’. Nearby another little church has been turned into a museum in which old tools used by the peasants are collected.

Among the many reasons why Calcata attracts both visitors and new inhabitants is its great variety of artistic realities. It is possible, in fact, to meet the artists and the artisans who live and work there. Wandering along the narrow streets where open windows and terraces let you admire the view of the nature reserve of the ‘Valle del Treja’, you can also have a look at the works of art in the galleries and exposition spaces and in the craft shops.

Moreover the village is famous because it offers a lot of chances to eat and drink. You can choose the place where you would like to most taste a typical Roman meal.

Nowadays Calcata is the typical destination for Roman people on a Sunday trip as it is only 40 km north of Rome.

It is easy to reach by car taking via Cassia and turning to Mazzano Romano- Calcata or by bus ‘Autolinee COTRAL’ from Saxa Rubra.

In Calcata you can find apartments for rent, here some addresses: