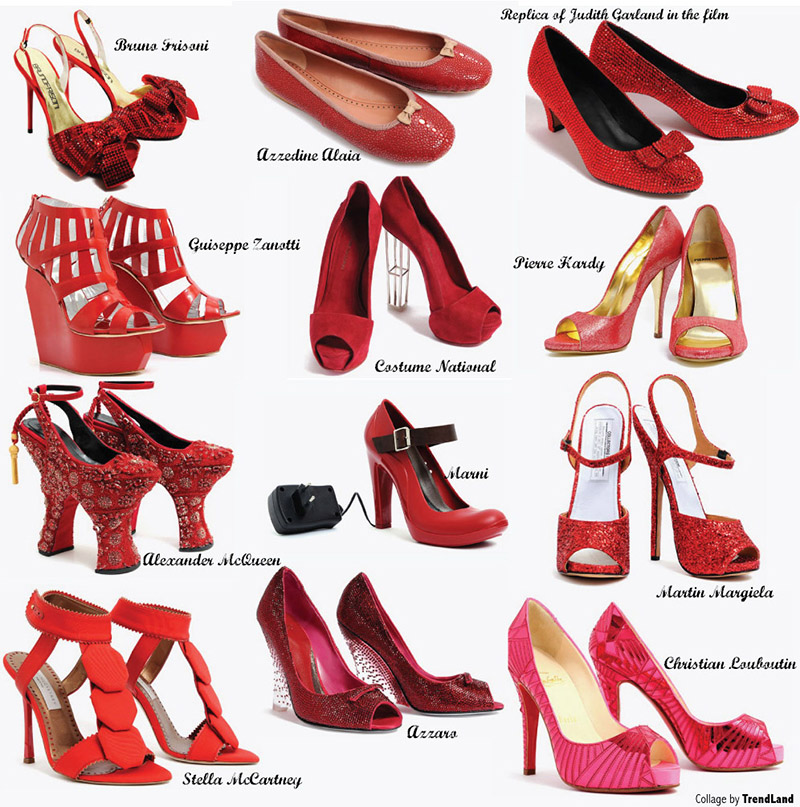 “Shoes are the only accessory you can’t leave the house without” Patrick Cox, 1997

All shoes, especially in those cases where creativity comes into play, are in themselves small works of art.  But sometimes these ‘icons of style’ have often become, especially in recent years, the inspiration and subject of paintings and sculpture and, above all, protagonist of a number of important Pop Art works. Don’t forget that Warhol started out as a shoe designer.

If shoes, like the cowl, do not make the monk, they certainly give important information concerning the person who wears them: his feelings, his spirits, and his style and taste. Shape, fun and seductiveness, archetype and everyday objects: these are some of the evocative meanings of footwear.

In Italy the taste and use of luxury, as related to shoes, has been handed down by Salvatore Ferragamo, a young Italian shoemaker. When he immigrated to Boston in 1914, he took the handcrafting of women’s shoes to America. Disillusioned by the production of shoes by machines, adopted by the Americans, he became a prop maker and made shoes by hand for the movies in California. He quickly became popular and when he returned to Italy in 1927, his celebrity clients remained loyal. In the 1930s, he made the cork platform shoe that remained in fashion for more than 10 years.

At the beginning of the 1940s footwear came into an era of great splendour, going from a mere accessory to a true fashion protagonist. A new profession was born, that of the designer who, whether already involved in Haute Couture or exclusively occupied in creating footwear, completely revolutionized the concept of style to make their creations some of the most significant and intriguing objects of desire of our era.

In 1951, Italian shoemaker Giovanni Battista Giorgini, organised the first ‘parade” to show off the talents of Italian shoe designers and manufacturers to a small group of insiders. The trade display immediately brought two Italian shoe designers to the world’s attention: Mario Valentino and Capucci. Valentino also made shoes for Jacqueline Kennedy. Sorelle Fontana even came up with a spiked ladies’ golfing pump whose heel was a tiny globe. In the meantime, the trade press went into business, contributing to promoting fashions ‘Made in Italy’ throughout the world.

Today, in Testaccio, Antonio Aglietti is continuing such an adventure using modern techniques and, imaginatively, almost the entire range of materials available for the made-to-measure shoemaker. He is a designer who gives art and cult status to footwear, and chart career paths to high fashion. Entering Mr. Aglietti’s shop means approaching an atelier of creativity and coming in touch with a self-made man able to believe in his dreams and designs. Coloured pictures on the yellowed walls and a red modern and comfortable sofa welcome the guests. Various shapes of shoes, both for men and women are shown in the shop-window, behind the hall. It appears his hidden workroom is full of the tools of the trade.

When did you start your career as designer of footwear’

In 1983, I received a degree at the ‘International Institute of Footwear’ in Milan and soon after, I entered the ‘Stylists Italian Association’ designing for shoe factories in Milan. But I also started to go around to study and visit all the most important workshops in the north to discover the old traditional techniques and to better know the ‘tricks of the trade’. Moreover, I am deeply linked to the idea of the ‘workshop’ which reminds me of when my father used to work as a shoemaker in his shop. After a lot of experience, I began devoting myself to the ‘workshop’ without giving up collaboration and offering my designs to some shoe factories, as well as to specialised magazines and publishers.

Does this activity take you a lot of time’

I happen to work a lot, like 14 or 15 hours a day, but I’m happy. All that is linked to the idea of creation, artistic ability and imagination do fascinate me; this passion gives me the strength to overcome all the difficulties.

How do you make shoes’

It needs 200 different phases to create a hand-made shoe. Each phase needs time to be completed. For example to get a high-quality hand-polishing requires at least 3 days. I use ‘technology’ for some processes only when I’m sure that it doesn’t compromise the final result. Otherwise I make shoes using the traditional techniques that date back a hundred years. I want my shoes to be a product with the mark of the best quality and to last a whole lifetime.

Well, I tend to maintain certain classical proportions together with a constant research and study of different materials and colours.

What about women’s and men’s reactions to your shoes’

Women pay more attention to the aesthetic qualities of the shoes, let’s say to the final product,while men are interested and curious about the way shoes are made.

What are your future projects’

You need a lot of skill and attitude to do a thing like this and it’s very difficult to find a good apprentice. All this gave me the idea to open my own atelier to give young people the chance to learn how to make shoes according to the ancient criteria of a workshop.

According to historians, the earliest shoes were cut to fit a left and right foot, which makes sense considering that they were all custom-made. In the mid-1500s, cobblers began making soles in the same shape for either foot. These were called ‘straights’. They didn’t begin making lefts and rights again until the mid-1800s. This 300-year hiatus came to an end due to vanity or, more precisely, to the invention of high heels usually attributed to Caterina de Medici.

Caterina went to Paris to marry the future Henry II of France. Being petite, she had several pairs of high-heeled shoes designed by an Italian shoemaker to make her look taller. The style took the French court by storm and soon spread through the European aristocracy, so much so that the servants had to assist with walking!

But cobblers could not produce the enormous quantities of hand-turned wooden lasts required to arch the sole for a heel and then to shape each last for a right and left foot. The choice between comfort and fashion was obvious, and society opted for the latter: heels on shoes that were not shaped, but straight.

by A. P. Iapadre and Alessia Angeli