Saturday was presented the historical path of Spirit and Nature that comes from Norcia to Montecassino. Three hundred kilometers from Norcia, the foothills of the Sibillini Mountains, in Subiaco, in the upper valley of the Aniene, until Cassino, the Liri Valley, through the places most of the life of St. Benedict.
16 stages through paths, driveways, and roads with low traffic, along valleys and mountains of Umbria and Lazio. 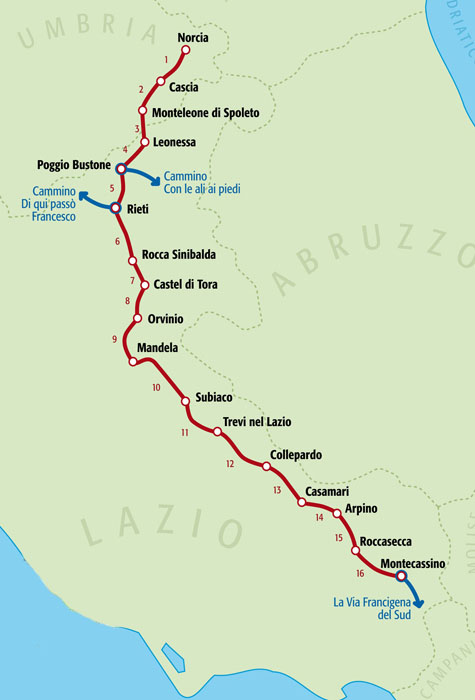 Not only a journey into the Benedictine world, but also a pilgrimage to the places of saints sometimes very popular, as Rita of Cascia, Francesco of Assisi, Tommaso D’Aquino; or less known as Joseph of Leonessa or Agostina Pietrantoni.

Each stage will be a discovery. With the slow pace allowed by traveling on foot or by bike, discover the heart of an Italy beautiful and unknown. If then the Way will enrich you spiritually, I will feel well spent my efforts!

It grows to 310 km. divided into 16 daily stages of paths, driveways and roads. The stages are designed as a function of distance (average length of about 20 km), the differences in height, and the possibility of accommodation. 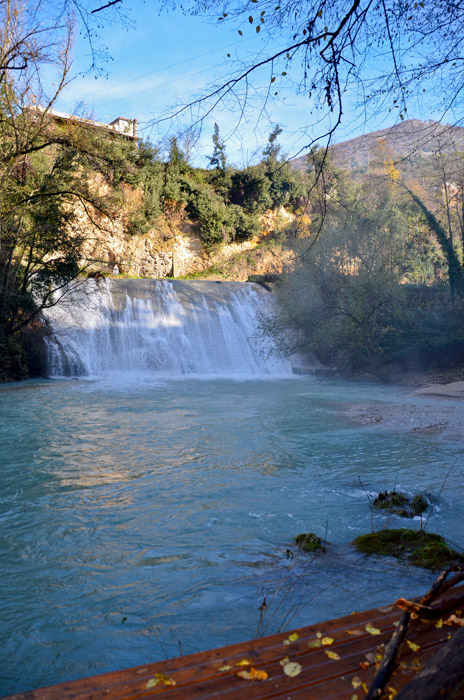 The bike tour is 340 km away. and mostly follows the Way walk, departing from them only in places. It can be divided into seven daily stages.

A Walk through the heart of Italy, that moving from Umbria, Lazio and runs through the reaches near the border with Campania. A journey in the footsteps of St. Benedict, which combines the three most important places Benedictine: Norcia, his birthplace; Subiaco, where he lived for over thirty years and founded several monasteries; and Monte Cassino, where he spent the last part of life and wrote the Rule. We will move to areas predominantly mountainous characteristics of central Italy. Norcia, hence the Way begins, is a charming town at the foot of the Sibillini mountains, loved by trekking enthusiasts and naturalists. Surpassing heights little high, we will touch small countries immersed in a perfect nature: Cascia, where he lived Santa Rita, the “Saint of the Impossible”; and Roccaporena, where she was born. Monteleone di Spoleto is a charming medieval village which stands at the edge of the plain leonessana; Lioness at the foot of the Rieti Mountains, is a fusion of medieval and Renaissance. Plunging in extended beech woods of Monti Reatini, Poggio Bustone, place that contains important Franciscan memories, we shall face the Holy Valley, the plain of the river Velino. From Rieti, papal city, we will continue to Rocca Sinibalda and Castel di Tora on the quiet and picturesque Lake Turano. We will touch delicious and welcoming small towns in the mountains Lucretili: Pozzaglia Orvinio and Mandela; then went down to the valley of the Aniene, for side streets after touching the pretty Gerano, reach Subiaco, our first big goal. Benedictine fundamental place in the experience, will combine spirituality, history, art, nature. In his history alternate abbots, popes, noble families. In Sacro Speco worked some of the greatest artists of the fourteenth century, and there was a pilgrim St. Francis of Assisi; while the Abbey of St. Scholastica is the cradle of the Italian press. The surrounding mountains Simbruini are lovely and little frequented; while the cool waters of the Aniene river lend themselves to sports. The area was important in ancient Rome, as its main water reserve. So many Roman relics: the remains of the Claudian aqueduct in Vicovaro, and Anio Novus in Trevi, the villa of Nero at Subiaco, the poet Horace to license, the Roman arch of Trevi. Beyond Trevi, we will be welcomed by the beautiful forests of the mountains Ernici. Scattered along the slopes of green mountains, a string of picturesque medieval villages: Guarcino, Vico and Collepardo. Under the major peaks of the mountains Ernici, we will leave enchanted by the beautiful Certosa Trisulti, place of water, forests, spirituality. Then we will aim towards the Liri valley, not before he visited the abbey of Casamari, magnificent example of Cistercian Gothic; and Monte San Giovanni Campano, one of the most beautiful towns in Italy. Arpino c’incanteranno the historical center and the stunning Acropolis; while we can not remain indifferent to the throats of the Melfa, place of solitude and beauty, once inhabited by hermits and today by a wild. From Roccasecca home to St. Thomas Aquinas Doctor of the Church, retracing the steps of monks, pilgrims and soldiers, we come finally to the abbey of Montecassino, the parent of an order that stretched from one end of Europe and that more than any other has contributed to the creation of a European Christian culture. This will be the best conclusion to a Way that led us to cross a large part of central Italy, to learn about the life and works of St. Benedict, along with art, culture, history of a good chunk of the “Bel Paese”.

wrep.eu
One comment to “THE WAY OF SAINT BENEDICT”