It’s 250 years from Canaletto’s death and Rome celebrates the famous Venetian painter of the ‘700 with the most important monographical exhibition ever in Italy at the Rome Museum, Palazzo Braschi at Piazza Navona.

Giovanni Antonio Canal (Venezia 1697 – 1768) left his sign in the European painting history, mostly because of his views, a secondary genre until that age. He lived before the birth of photography, but he impressed on the canvas a live perspective coming from his scenographical experience and the contemporary optical discoveries, a mix of natural and creative. His technique revealed a play of shadows, lights, and colors, as a witness of the lights and the “Grand Tour” age. This exhibition shows the evolution of his technique and his contest atmosphere.

Canaletto 1697-1768: the most important exhibition in Italy
The exhibition, that reveals the works’ artist genesis through a dossier of his personality and creativity, includes 42 paintings, some of his best masterpieces, 9 drawings, 16 books, and documents. There are 8 sections that tell his different technical and stylistic phases: from his first free and dramatic way – a great focus on it – to the most fascinating Venice’s images and the elegant one of his English phase up to the late sophisticated “capricci”. Also, the collectible investigation is described here. together with his relationship with theatre, the archeological capricci about the ancient Roman ruins, his collaborators and the atelier. 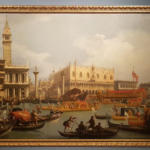 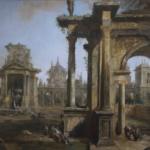 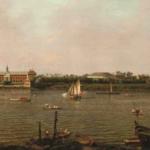 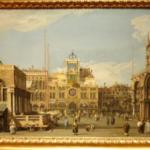 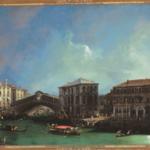 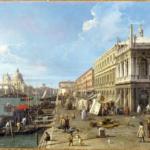 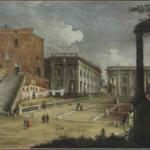 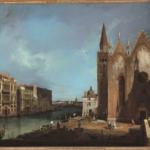 His masterpieces
Among the masterpieces there are Bucintoro di ritorno al Molo il giorno dell’Ascensione from the Pushkin Musem, and two works from the Turin Pinacoteca Gianni and Marella Agnelli: Il Canal Grande da nord, verso il ponte di Rialto, and Il Canal Grande con Santa Maria della Carità, for the first time together with the handbook of the Lucca National Library that describes how it was commissioned and realized.
Of great importance, two paintings from one single tableau Chelsea da Battersea Reach, cut before 1802 and here together again for the first time. The left part comes from Blickling Hall, National Trust, UK, the right one from the Museo Nacional De Bellas Artes de la Habana, rarely given from the Cuban Government.

The preparing drawings let us see the backstage artist. His ability to catch reality and commute it with fantasy, transforming the idea of Canaletto as a photographer.

“…he was one of the most talented painters of his day in depicting views and perspective, taken both from reality and from imagination”.
A.M Zanetti, 1768

The artist
He mostly dedicated to painting and sculpture, Tiepolo and Winkelman contemporary, and lived in Venice, Rome, and London, thanks to the works ordered by the foreign ambassadors and magnates who lived in Italy and wanted to bring a “bel paese” souvenir away. Architectonical details and everyday life will reach the most important Museums in the world (Boston, Cincinnati, Mosca, Havana), that lent these works to this exhibition.
He came to Rome for the first time in 1719, with his father, where he worked for theatrical scenography, but started to suffer all this. At Rome, he found good subjects, especially antiquities, and could appreciate important international views painters.
He went back to Venice in the 1720 and brought the Roman ruins into the capricci, where real life and imagination grew together.
The foggy air of the initial Venice lagoon becomes clear light, also because of the Newton theory about light and colors. In the thirties the atmosphere of the views, architecture, everyday life and big events is crystalline.

Museo di Roma Palazzo Braschi
Palazzo Braschi, that hosts the Rome Museum collection with a magnificent view of the Piazza Navona Square, deserves a special note. Completly renewed it facilitates the exhibition view and preserves the history of Rome: paintings, ruins, graphical works photos from the 1600 to the 1900. Very interesting the photos collection of the urban works to realize Via della Conciliazione e Via del Mare.