For the Roman Summer 2018, from 13 to 26 September 2018, a traveling project for the city of Rome: Paesaggi Umani (Human Landscapes).  The Performing Media Storytelling for a narration in action, with the feet on the ground and the head in the cloud.
It is not a festival but a journey: a sort of “mobile party” that runs through Rome.

All events will be characterized by nomadism, so it will be very rare to occupy public space, we will cross it with our participatory exploration walkabouts and some happenings (the Silent Play and the nomad video projections) that do not require installations. 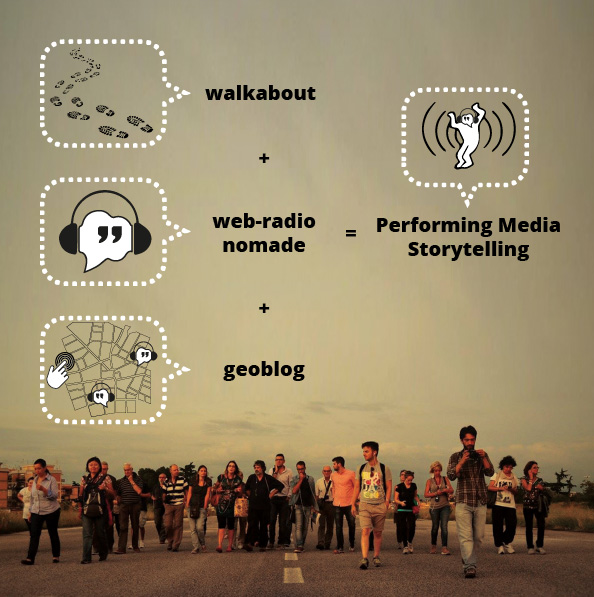 The project intends to create an elective path in which to create the enabling conditions for listening and viewing within some “environmental islands” within the city.

The peculiarity of the project is in the management of a series of participatory walkabouts that will cross neighborhoods, districts and hamlets, conversing via whisper-radio and in expanded mode on web-radio nomad (on radiowalkabout.it ).

The performing media integrates with walkabouts through the use of nomad video projections, web-radio and interactive maps in which to reveal the genius loci of the territories through the voices of its protagonists (the “human landscapes”) in a particular storytelling that will develop with “the feet on the ground and the head in the cloud”.

Urban Experience explores the territories with the opposite approach to that of guided tours, to make it explicit is this motto: “We travel inside ourselves when we find ourselves in places that remind us of what we are looking for”. It is with the imprint of this idea of ​​continuous passages, combining identities and differences, that with Urban Experience we explore Rome, talking about it: talking about what happens to us “playing the city”, as we walk, listening to whisper-radio systems, with those headphones that we often see wear to tourists in the flock and that we use with a psychogeographic approach in the swarm of walking-talking head erring in the city.

This is one of the key modalities for that research of territorial innovation that through the formats of Performing Media dynamizes urban explorations with walkabouts: ‘nomadic conversations’ that, thanks to the whisper-radio systems, stimulate a ‘connective’ confrontation while walking . The peripatetic flow thus expands in a participatory radio broadcast, broadcast in streaming on web-radio.

By wandering the streets, we seek the right harmony with the small stories of the communities, in a physical, performative and connective relationship, activating a sentient, playful and supportive participation: resilient.

The aim is to activate a dynamic awareness of the peculiarities of a city that is increasingly more stratified, involving both the younger citizens of primary schools and the elderly who help us to detect the hidden traces of the many urban sediments that have changed the city, dynamizing the different forms of representation and self-organization of communities, both territorial and thematic, which contribute to give social form to the urban space of coexistence. 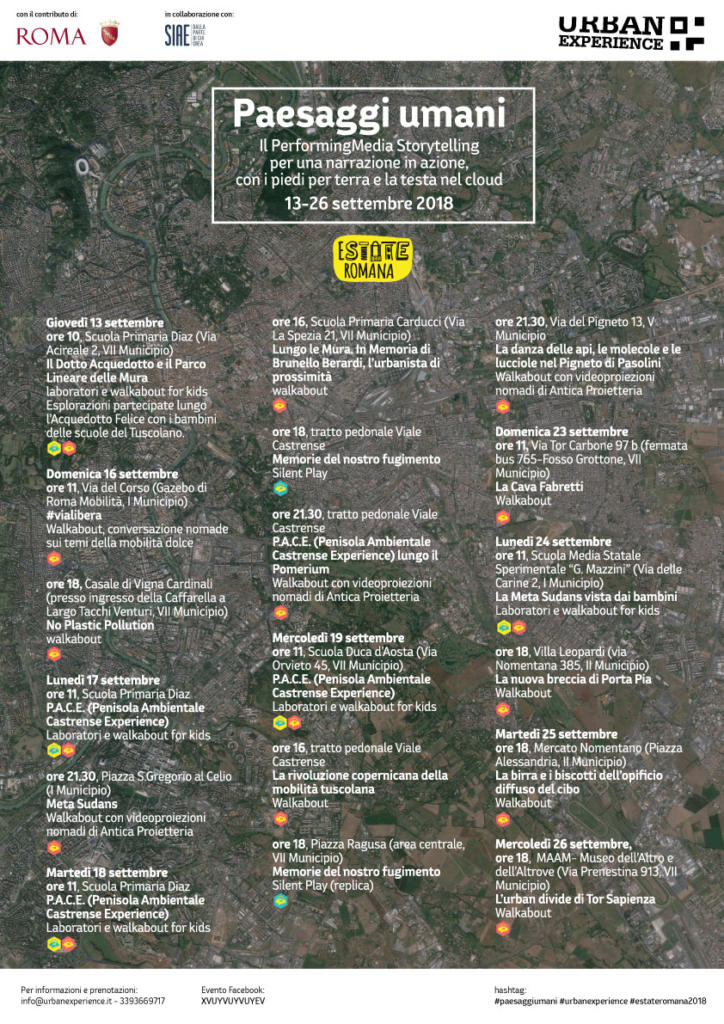 No. Non è un festival ma un viaggio: una sorta di “festa mobile” che attraversa Roma. (No. It is not a festival but a journey: a sort of “mobile party” that runs through Rome.)

Carlo Infante is President and Managing Director of Urban Experience, opinion leader and freelance professor of Performing Media in universities, academies, other education, and training centers where the trend is to interpret innovation through the social and cultural use of the new media. In the 1980s, he directed important festivals such as “Scenari dell’Immateriale”, he was anchor (and author) of different radio programs on Radio1 and Radio3, as well as TV anchorman of “Mediamente.scuola” on RAI3 and “Salva con Nome” on RAInews24 (in 2009). On the occasion of the Turin Olympic Games in 2006, he created web formats – such as “geoblog” (which allowed to write histories on geographies far ahead of GoogleMaps) – which express the creativity tensions of social innovation on the ground (e.g. on the occasion of Performing Media Lab in Salento, “La Notte della Taranta”, and in Piedmont within “Bene Confiscato alle Mafie”). He has also been in charge of a wide variety of projects on cultural and anthropological shifts brought about by the evolution of technology. He is author of “Educare on line” (1997, Netbook), “Imparare giocando” (Bollati Boringhieri, 2000), Edutainment (Coop Italia, 2003), “Performing Media. La nuova spettacolarità della comunicazione interattiva e mobile” (Novecentolibri, 2004), “Performing Media 1.1 Politica e poetica delle reti” (Memori, 2006) and many other essays and articles for different magazines and newspapers (including recently for NOVA-Sole24ore, Tiscali and L’Unità for the monthly UniTag). He is among the promoters of the “Stati Generali dell’Innovazione” (The States-General of Innovation).