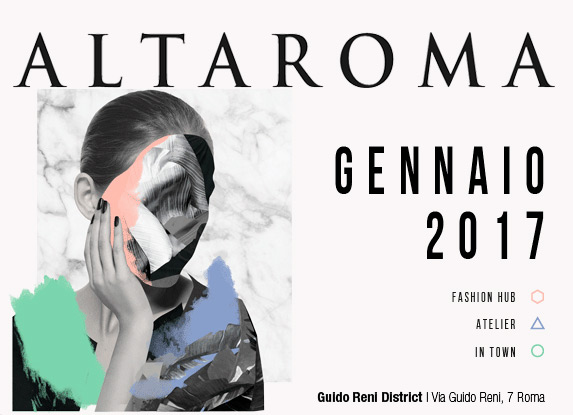 AltaRoma is important for the city not only because it attracts international buyers and promotes trade but also because, thanks to the competition of talent scouting Who’s On Next ?, has enabled a new generation to emerge at the level designer. And this year there are many designers that after the success of the contest, returned to march to the Roman catwalks, such as Greta Boldini and Marianna Cimini, who opened the January edition of AltaRoma 2017.

Dresses that reach the ankles, pleated skirts and men’s outerwear dress the figure of Greta Boldini woman-moth, in a rigorous and elegant collection that uses a color palette decided, as anthracite, tangerine, rose next to the most violent colors such as lilac, pink blusher and moss. Pure cashmere, pure silk crepe de chine, lace, chiffon, tulle and necklines of fox and mink to cloak 40s silhouette of this collection of Maison Greta Boldini created by designers Alexander Flagella and Michael Musco.

The next day we visit the exhibition of installations by Giuseppe Penone, hosted by Fendi to the Palace of Italian Civilization and go to two shows, that of Rani Zakhem and that of Giada Curti.

Rani Zakhem has created a collection of clothes that is ideally the wardrobe from which to draw for a party at Studio 54, in an ethereal reinterpretation and personnel of Dalida outfits and Bianca Jagger. Sequin jumpsuits that dance around the figure, necklines plan, details of rich embroidery stones and crystals, short cocktail dresses, long dresses, which mark the figure around the torso and widen downwards. The colors make their mark in this collection, truly rich in beautiful creations.

Giada Curti, the Secret Garden Collection, takes us on an enchanted garden, inspired by the works of Alma Tadema. Dresses in Mikado, in bold stripes or floral design, silk voile, precious embroideries that dress and underlie the Giada Curti Haute Couture woman.

Saturday, after the beautiful parade of Vittorio Camaiani at the Westin Excelsior and the opening of Chiara Boni boutique in Via del Babuino, let’s go to the parade of Renato Balestra, which opens with a rainbow dress, with the whole range of colors of this refined collection that Master has created inspired by the spring and the awakening of nature.

The Look the Year this year is the closing event of the fashion week. Led by Jo Ring, with the parade of the collections of Roberta Cenci (Italy), Sofia Borisova-Romantika (Bulgaria), Bym Generation (France).

Between a walkway and the other, it was possible to visit three exhibitions to Guido Reni District: Artisanal Intelligence Studio, Wion and The Secrets of Couture.

A.I. – Artisanal Intelligence, returns the name of Artisanal Intelligence Studio and is a space in which the artist’s work is both fashionable and superior craftsmanship artifact, in a project that links architecture, design and fashion. The Tapestry is the textile archetype on which begins the path that runs from Henry Accatino to Alberto di Fabio, with their tapestries made at a distance of fifty dall’Arazzeria Pennese. Leather goods such as handbags Magrì and Aletheia shoes Milan, are exposed near the David Grillo clothes, Jezabelle Cormio, Karoline Lang, Ahirain, Vien and Frederick Hornof. The textile experiment as the dress by Numerical Series, continues with skin and material wefts of Marta Mantovani, the bags of Forms Study and Solipsi, and Collanevrosi necklaces.

The cycle focuses on clothing and works of Aurore Thibout, textile poet, a perfect synthesis of the creative process, and declines with large table of The HUB Barbara Zucchi Frua, the famous Milanese Hubber for making textiles sewing and more social thanks to his shop-laboratory, always inspired by the conservation values ​​of a cultural and craft heritage, is also a community open to new technologies.

Wion however is exposure of the accessories created by Akhal-Teke, Azzurra Gronchi, Damico Milan, Ioanna Solea, Lodovico Zordanazzo, Pugnetti Parma and Schield, all designers from the last edition of “Who Is On Next?”)

The Secrets of Couture hosts some of the most significant creations of four young couturier, chosen among the most representative of the moment – Hussein Bazaza, Antonio Grimaldi, Krikor Jabotian and Aouadi Paris- in a staging impressive, achieved through a play of projections , frames and video installations that capture the viewer and carry it into the atmosphere created by Jeff Bark videos for Rome.

Born from an idea by Silvia Venturini Fendi and created by Alta Roma with the aim to promote and protect the Made in Italy, The Secrets of Couture addresses the issue of transmission of ancient knowledge that are closer to the new generations with codes and contemporary languages.